Innovate or Stagnate: Alex Dreyfus Warns of the Existential Threat to Poker 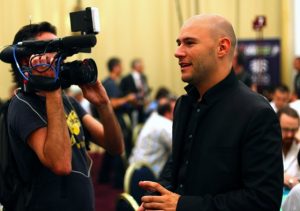 Reinventing Poker: Alex Dreyfus believes that poker could become a “has-been game of the 2000’s,” unless it is rethought.

Alex Dreyfus, CEO of the Global Poker Index has warned that poker is in danger of becoming “the has-been game of 2000s,” unless it is able to innovate and reinvent itself.

Writing in an opinion piece for Huffington Post UK, Dreyfus said that the biggest threat to poker comes from video gaming and from new trends like the online card game Hearthstone.

Hearthstone is a digital turn-based card game set in the World of Warcraft universe. Like Magic: The Gathering, it incorporates skill and an element of chance, allowing players to cast spells, equip weapons, and summoning “minions” to battle against opponents.

Released in March 2014, the game has 30 million registered users, which means that in just 18 months it has amassed the equivalent of 40 percent of PokerStars’ entire user base since its incorporation in 2001.

While five or six years ago poker was considered to be a “young man’s game,” it seems this is no longer the case.

Online poker games are tougher than they were a decade ago when the likes of Tom Dwan and Phil Galfond were discovering the game, which makes it harder for new players to break in.

Young Americans are no longer able to play legally in their own country, of course, and meanwhile youngsters elsewhere who may have turned to poker in the past have new distractions like e-sports and Hearthstone to keep them entertained.

“Apparently, the average online poker player’s age in the regulated US market is 40,” writes Dreyfus. “Without knowing officially, I’d take a guess that the average age in Europe would be around 33. My company recently conducted a survey and interestingly revealed that 50 percent of current poker fans have been active for 10 years.”

“Daniel Negreanu, regarded as the best poker player in the world, has publicly said that he is addicted to Hearthstone and plays every day,” he continues. “Recently, I met the number one Italian poker player and he told me he is now spending more time on Hearthstone than poker. Do they make more money? No, but they enjoy the game and the experience.”

The recent trend in e-sports has clearly shaped Dreyfus’ vision for his Global Poker League project, particularly in the design of “The Cube,” which aims to remold live poker as true spectator sport.

The Cube is a portable 20-foot one-way soundproof glass case that beams player hole cards and live data from its top for the benefit of spectators, and is similar to the set-up used in e-sports. It will offer, says GPI, “the first-ever immersive poker event in the world.”

Not even Dreyfus, one senses, is entirely sure that it will work, but it’s clear he is determined to try: to prevent poker from stagnating by rethinking the game and moving relentlessly with the zeitgeist.

Let’s see how old is the poker game? Need i say more lol!!!

Poker was invented around 2006.