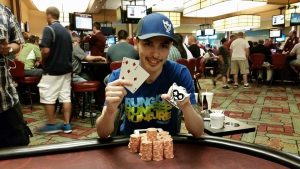 iNinja Poker Tour founder Issac Tucker, who players have accused of gross mismanagement. But it seems local businessman Alan Carty has stepped in to save the day. (Image: MNpokermag)

The iNinja Poker Tour has promised it will undergo a full operational shake-up following allegations that the tour’s founder, Issac Tucker, was running the business like his own personal Ponzi scheme.

iNinja is a mid-stakes poker tour based around the Twin Cities area in Minneapolis. Alarm bells began ringing about Tucker’s conduct when he was publicly arrested just prior to the start of an iNinja event in August at the Canterbury Park casino and racecourse in Shakopee.

Although the charges, of felony theft, appear not to have stuck, local sheriff department records revealed a litany of driving offenses on Tucker’s record, with as many as 40 infractions.

Then last week three former sponsored pros on the tour, Aaron Johnson, Kou Vang and Vlad Revniaga, published their own account of their dealings with Tucker, “a mountain of evidence which undeniably show[s] that Isaac has conducted himself unethically, unscrupulously, and deceptively,” in the players’ own words.

The three players accuse Tucker of, among other things, late or non-payments to sponsored players, bouncing checks, failure to segregate player money and operational expenses, hustling for large loans from players with seemingly no chance of paying them back, and offering “fool’s gold” shares in the company in return for large investments.

Tucker also has a history of excuse-making and fabricating stories, according to the players, including telling them he had been hospitalized in a car crash when he was, in fact, in jail as a result of one of his many traffic violations.

“Issac appears to have no money and is simply trying to raise funds to pay off other debts and keep his enterprise afloat,” said the players. “iNinja is basically being operated as Issac’s own money making operation and not a business.”

None of this is a good recipe for a growing poker tour. But at least some people still seem to have some faith in the reckless Tucker, namely local businessman Alan Carty, who stepped in over the weekend to save the sinking ship. Carty, who already had shares in the enterprise, will increase his investment and take over management of the tour’s financial affairs.

He will also honor all of Tucker’s debts.

While Carty admitted Tucker has indeed been reckless, he reserved praise for his “excellent marketing” and “ability to generate interest in the tour” and “organize tournaments at some very good venues.”

However, in a “list of what Issac did wrong, Carty said he also, “tried to run before he learned to crawl … wanted to be huge on Day 1 instead of building it slowly and organically … offered financial deals to too many poker players in return for them representing the brand … paid far too much for professional services, many of which should never have been used by a fledgling company … borrowed money from individuals to help bridge the gaps between tournaments and was overly optimistic on his repayment schedules.”

A presumably very relieved, Tucker published a statement on Twitter to “apologize to the community about how the situation has been handled” and for his “mismanagement in operating iNinja Poker.”