In India, Poker Drawing in More Women Than Ever Before
December 7, 2015 Latest Poker News

In India, Poker Drawing in More Women Than Ever Before 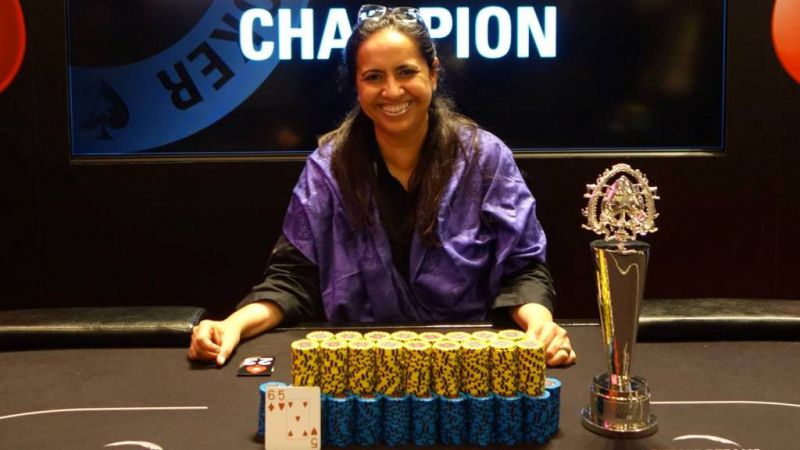 Anju Abrol, who took down a PokerStars-sponsored Asia Championship of Poker (ACOP) live in Macau in 2014, is on the forefront of women in India who are fans of the game. (Image: PokerStars.com)

India is known for many things: the Taj Mahal, amazing food, and many controversial social issues. Poker may not jump to mind when you think of this ancient country, but not only is it popular there, it is now gaining special interest among Indian women specifically.

That’s mostly in home games, for the moment, anyway.

For now, only a few females play in national poker tournaments in India, but the card game is catching on in major cities such as Bengaluru, the capital of the Indian state of Karnataka.

“I have seen women wearing nail paint to kaftans depicting poker chips. That is the level of poker rage now. It is an engaging mind game which involves much math and technique,” Sheetal Sharma, a fashion choreographer, told The Economic Times recently.

More than Just a Game

Poker is the new fad in Bengaluru among women, but it’s more than just a game. Just ask restaurateur Shweta Gupta.

“Poker gives a high. Your observation skills improve as you study people who could be bluffing,” she told ET.

Gupta is a member of a group of women who meet for dinner and wine. Nowadays, the group’s main focus is poker. The food is “curated around the game,” Gupta says.

Members of the organization get together once every ten days to play poker for approximately three hours. That’s just one example of many that shows poker is growing in popularity among women in India.

Poker overall is still something of a gray market in India, so no matter what sex you are, it’s still a bit nebulous as far as its legalities go. The Indian Supreme Court, in a move that interestingly mirrors a lot of issues now being grappled with in the US, looks at gambling per se as illegal, but may consider “games of skill” in a different category.

However, nothing solid has yet been determined by the Court vis-a-vis poker per se, except for a previous 2013 ruling in which it upheld that both rummy and poker did fall into the “skill” category.

PokerStars and 888poker both operate online in the still-gray market country. And PokerStars must know how popular the game is, having signed Aditya Agarwal as its first-ever Indian team pro.

While poker was once viewed as a “gentleman’s game,” great players such as Jennifer Harman and Vanessa Selbst, among many others, have shown that women can compete at the highest level.

But for unknown reasons, poker simply hasn’t caught on enough with women. Some argue poker is, even in today’s society where millions fight for equal rights, a “boy’s club” type of game. Others believe the poker community doesn’t market effectively towards women, or make it a comfortable enough climate to draw more females to the felt.

Less than six percent of all 2015 World Series of Poker participants were female. Alex Dreyfus of the Global Poker Index recently said that women represent only three to four percent of live poker players. That means in a packed 10-table poker room, on average, only three-four women will be among the crowd.

Recent allegations of sexual harassment and even rape among a few unnamed top poker pros is no doubt not helping the cause either. Justin Bonomo published a blog on the incendiary topic just last month.

The lack of female participation in poker is concerning to those that want the game to continue growing. However, attracting women to the game isn’t an easy task. Getting more women interested in poker will help grow the game globally, but requires a culture where poker isn’t considered only a man’s game.

That’s at least beginning to happen in India.

nice one .. we need women participation in poker more and more