Typhoon Hato couldn’t keep most of Macau’s casinos down for long, as they largely rebounded quickly from the worst such storm to hit the area in 53 years. But the rest of the city is still dealing with the aftermath, and resort owners have come together and pledged $27 million in aid to help with the recovery. 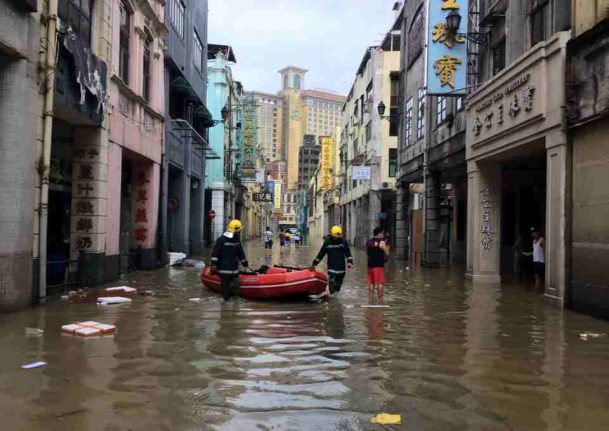 The natural disaster, which hit on August 23, was responsible for 10 deaths and at least 153 injuries.

There is no estimate yet on the cost of the non-human damage, but government officials peg the amount at about $1 billion. In response to the catastrophe, six operators started offering financial assistance a few days after the storm passed through. The motive is hopefully altruistic, but all of the resorts will have to potentially reapply for gaming licenses when their current concessions expire on various dates between 2020 and 2022, and being active in the community will likely help their cause.

Giving in All Forms

Two days after the powerful storm hit, Melco Resorts announced it was giving a donation of $3.75 million “cash relief fund to support employees, the community and the restoration efforts.” The gaming operator runs the City of Dreams casino in the Chinese gaming region.

“(This is) to support the relief efforts of the people of Macau as well as company employees during this challenging and stressful period,” he said.”

Casino operator SJM Holdings said it was providing free medical treatment to those in need for a month at a local healthcare center.

Sheldon Adelson, who owns the Venetian Macau, also offered $3.75 million from his Sands Corporation, and another $4.3 million from his Adelson Family Foundation to help with relief efforts.

Steve Wynn donated $3.75 million to assist families and local businesses. He made an identical contribution to those suffering from Hurricane Harvey in Texas. He has no properties in Texas, where most forms of gaming remain illegal, and has the Wynn Macau where Hato hit.

While Adelson and Wynn’s casinos are on the Cotai Strip and were minimally inconvenienced, only losing power for a short time, some of their employees saw their lives severely affected by the typhoon.

“In Macau, our employee’s homes have been damaged and their lives have been interrupted; many of them have suffered,” Wynn said in an issued statement. “So, too, have our customers who were caught in the grip of the typhoon.”

He marveled that despite the hardship the workers were experiencing, they were part of an army of volunteers who were distributing water and supplies to the community, while also helping clean up and rebuild some of the damaged neighborhoods.

Wow thats terrible ,nice the casinos helped out thats a drop in the bucket to them