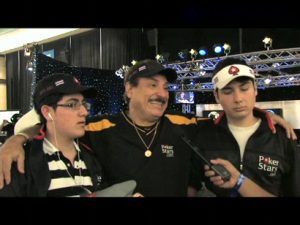 Humberto Brenes will spend more time with his family after announcing his departure from PokerStars Team Pro. (Image: cdn.pokertube.com)

Humberto Brenes and PokerStars have parted ways after eight years of sponsorship contracts. Brenes has long been a staple on the roster of Team PokerStars Pros, and the news that his latest contract was not renewed took many by surprise.

While the breakup is said to be mutual, it should be noted that the Brenes departure from Team PokerStars Pro came shortly after the Amaya Gaming acquisition of PokerStars was completed. Brenes was part of the Latin American team, which is no longer in existence on the PokerStars website. There are still separate categories for Argentina, Brazil, and Mexico, but there is no mention of Latin America as a whole or Brenes’ home country of Costa Rica.

Brenes had a contract that had been renewed regularly and was up for review before it ended this year on July 31. Suddenly, Brenes’ Team PokerStars Pro biographical page was removed from the PokerStars website, and though his Twitter photo still boasts of the PokerStars logo on his clothing, his link now forwards to a Facebook page called, “Humberto Home Games.”

Brenes spoke with PokerNews about the departure from the team, noting that the contract was not renewed. He added, “This decision was made through mutual agreement between the parties. The terms of the renewal were not suited for the company or for myself, so we decided to end the relationship.”

According to his account, Brenes and some PokerStars executives had dinner recently and came to the mutual decision.

“This was not a surprise,” he said. “It had been discussed. … There was no insistence of a renewal by either party, and I think we came up with a good deal at the right time.”

Brenes also spoke of the new “management approach” that “goes beyond poker.” He said that the company “had to make strategic decisions, and I think in my case this came at a good time.”

He says he now looks forward to spending more time with family and focusing on the family businesses. His goals seem to revolve around ensuring that his own company moves forward with the help of his children, while poker is more of a hobby for him now, and only when time permits.

Under the new ownership of Amaya, PokerStars seems to be walking a very careful line with regard to gaming regulations of various markets around the world. For example, the company paid special attention to obtaining a proper license in Bulgaria and is working with the UK Gaming Commission to ensure paperwork is filed in a timely manner to coincide with new laws.

The company seems to have no plans to leave the Latin American market as a whole and did confirm with Brenes that PokerStars will maintain a presence in Costa Rica. He noted that there are nearly 300 people in that office, and that is not expected to change.

Even so, he pointed out that “…the matter should be treated carefully, especially with Latin American players since the focus of the company will not be only poker. The amount of sponsored players could be reduced, but that’s up to the new administration. I don’t see it possible that the company could hire new faces for the team.”

Along these lines, it seems that Angel Giullen is no longer a member of the Team PokerStars Mexico page, as only Christian De Leon remains on that part of the PokerStars website. Leo Fernandez remains on the Argentinian page but Jose “Nacho” Barbero is missing. Andre Akkari is still on the Brazil team.

More changes are expected, and announcements from players likely forthcoming.

hunberto brenes, an excellent player phenomenon, so is in the Hall of Fame!