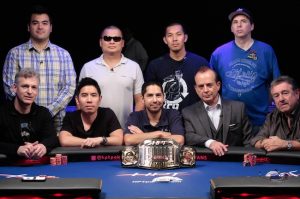 With each stop, the Heartland Poker Tour sets the stage for exciting and memorable events which are perfectly suited for the televised nature of the tour. After a successful stop in one location, it is common for the tour to come back again to recapture the magic. Because of the great reception in 2013, the Commerce Casino & Hotel has invited the Heartland Poker Tour to return for two events which will be nationally televised for their tenth season in 2014.

Action at The Commerce

The first stop at the Commerce is actually designated as the finale to the California State Poker Championship, which takes place April 30 through May 19. Though no specifics have been announced, plenty of events will compromise the 3-week schedule leading up to the Main Event which starts on May 15. The Commerce will also be involved with HPT’s 2nd Annual Gold Rush Series in the fall. Action will go on for a series of weeks leading into the Main Event that kicks off September 18.

Last year’s Gold Rush Series resulted in $3.39 million being paid out for tournament play. Some 577 players entered the field during the Main Event at The Commerce. It was Kris Tong who rose to the top, earning $165,000 and the championship title. During HPT’s stay at The Commerce, their camera crew will constantly be filming tournament action, including footage of the casino property. Said footage will be used for two episodes of “Heartland Poker Tour.” HPT’s coverage of the event will be expanded because of the increase in the California State Poker Championship’s size.

Having a TV production crew on site will be a valuable opportunity for The Commerce Casino & Hotel to show off the fresh renovations made to the facilities. Sporting over 240 tables, The Commerce’s claim to fame is being the world’s largest card room. The 200-room, Las Vegas-style Crowne Plaza Hotel features a full-service spa with a movie lounge, ballroom, pool, and banquet facilities. The casino – which is  located in the California city of the same name – is also close to popular tourist attractions like Hollywood, Disneyland, and Universal Studios. Additionally, Commerce has hosted MMA matches, professional boxing and wrestling events, and is a major sponsor of the L.A. Clippers.

For pure poker enthusiasts, though, nearly every form of the game is available. From Texas Hold’em, 7-Card Stud, Omaha, Pot Limit and more, players can also experience other popular table games like blackjack, pai gow and baccarat. The $20-million Los Angeles Poker Classic also finds its home at The Commerce.

HPT’s tenth season is set to be one of the series’ best. The first stop kicked off with “HPT on the High Seas” in the Caribbean. The second stop at the Thunder Valley Casino Resort saw 37-year-old Exequiel Fernando turn his $720 investment into a $179,000 return. HPT will be traveling the United States in 2014, filming in Colorado, Mississippi, and Missouri, among other U.S. states. Footage from all those events will be televised to over 100 million American homes. HPT is also being distributed in Europe, the Caribbean, the Middle East, North Africa, and Asia to increase the tour’s popularity and exposure.