For the past few years, New Jersey’s bid to overturn the Professional and Amateur Sports Protection Act (PASPA) and regulate sports betting within its borders may have seemed like a longshot. But when the US Supreme Court agreed to hear the case of Christie v. the NCAA in 2017, it changed the calculus of how people were viewing the prospects for future legal sports betting throughout the United States. 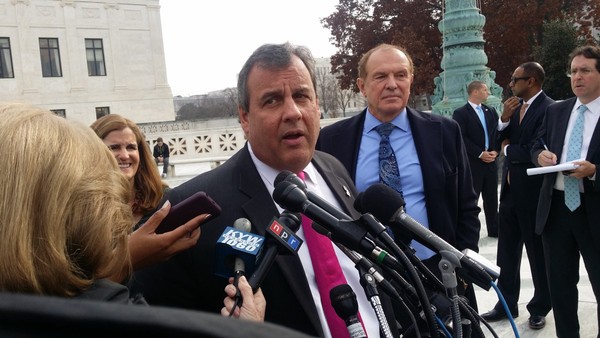 If Gov. Chris Christie and New Jersey were successful in convincing the US Supreme Court to overturn PASPA, sports betting could proliferate in casinos across the country starting next year. (Image: Jonathan D. Salant/NJ Advance Media)

Poker players are no strangers to betting on sports. Both gambling options offer the opportunity to look for edges to make a profit, so it’s little surprise that these two different gaming activities tend to attract many of the same bettors.

But while legal sports wagering in the United States has mostly been contained to Nevada (with minor exceptions for Delaware and two other states), the current case pending in the Supreme Court could prove to be a real game changer, with the state of New Jersey attempting to overturn restrictions put in place by PASPA, the 1992 law that limits casino sports betting to Nevada by preventing other states from regulating gambling on sporting events.

According to lawyers for New Jersey, PASPA is an unconstitutional “direct command” to the states that tells them how they may or may not legislate, rather than a federal regulation that states are required to follow. And based on how Supreme Court justices responded to oral arguments in December, it appears that the majority of justices are inclined to agree with that view.

The Supreme Court ruling on the case should come no later than June 2018. While it’s impossible to be certain what the justices will decide, most legal scholars seemed to agree that the nature of their questioning suggested a solid majority were leaning in favor of New Jersey’s arguments.

Ready to Capitalize on PASPA Repeal

If the court should ultimately choose to dismantle PASPA, it could result in a rapid expansion of legal sports betting across the US. Twenty states signed on to an amicus brief in support of New Jersey in the case, while New York, Pennsylvania, Connecticut, and Mississippi have already passed laws that would allow for sports betting should PASPA be struck down.

Christie says New Jersey could have their sports betting operations set up in as little as two weeks after a ruling in the state’s favor.

For poker players, that could mean a very short walk to the sportsbook while playing at World Poker Tour destinations like Foxwoods and the Borgata. Online poker players might also see sports betting options in New Jersey and (once the sites are up and running) Pennsylvania.

Granted, this may not mean more betting for poker players. Many outside of Nevada likely already contribute in some way to the estimated $150 billion that is bet on sports illegally by Americans every year. But legalization would bring these bets out of the shadows and into the casinos, meaning we might all get to see more pictures of huge winning (and losing) tickets from our favorite poker pros on Twitter.

this is good news, hopefully we can finally get regulated online gambling soon and people can do whatever the hell they want with there own hard earned money

Can something really happen Good for Poker in the USA in 2018?
It’s great to hear New Jersey is leading the way to overturn the Professional and Amateur Sports Protection Act. Reading that the US Supreme Court will hear the case of

Christie v. the NCAA in 2017 gives us hope that some sanity may be headed our way when it comes to the future of legal betting for the rest of the US.
I won’t hold my breath here in California but who knows – maybe someday? Soon?

Finally!
Hope poker legislative will take the same way… I still wonder how is it possible than US players are not able to freely play on any site they want. In my country, poker got banned, but most of the sites dont even respect it so I can play freely. Only 888 withdrew from Slovakia, which really disappoints me as I liked that site.