Hossein Ensan is your 2019 WSOP Main Event winner and now $10 million richer. As we projected here at CardsChat prior to the start of the final table, the Iranian-born pro, who resides in Germany, becomes poker’s 50th world champion. 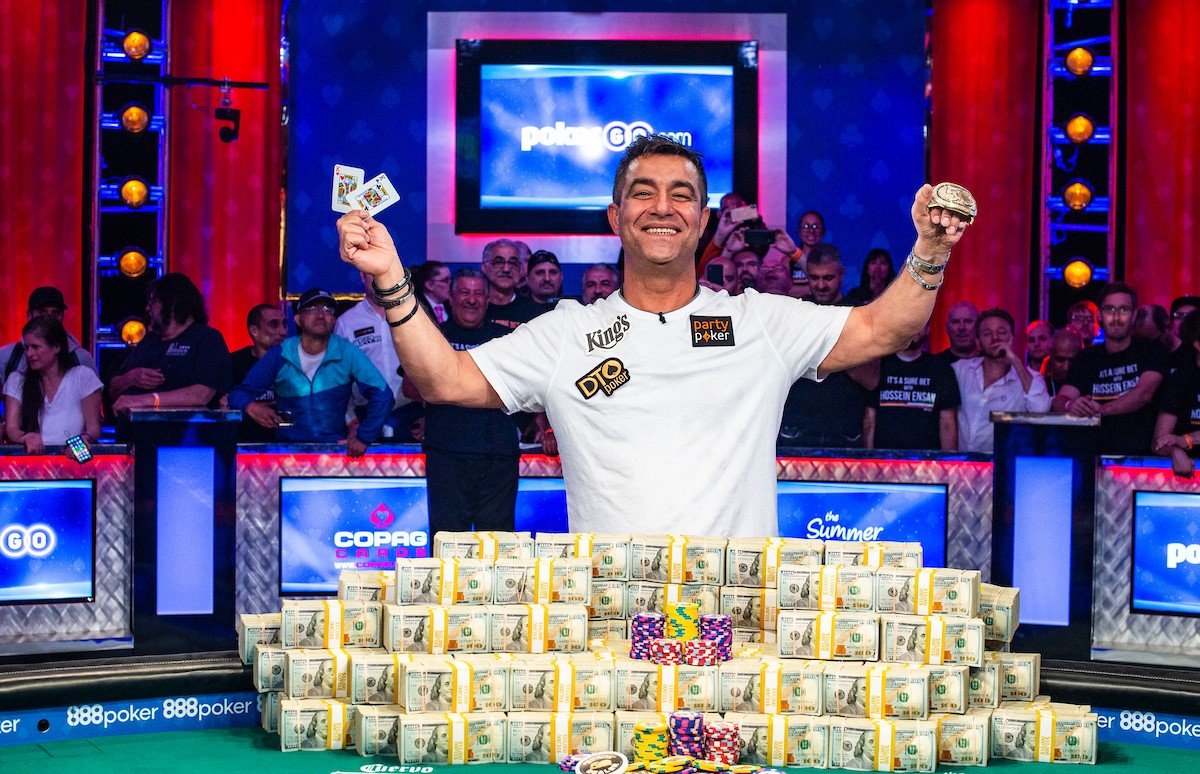 Ensan defeated Dario Sammartino in a lengthy heads-up battle that included a few massive swings. The two talented pros were supported by rowdy rails cheering them on throughout the exciting match. Alex Livingston, who finished 13th in 2013, was knocked out in third place.

Hossein Ensan certainly got the most out of his first career WSOP cash by winning the Main Event for $10 million. He becomes the 50th poker world champion, replacing last year’s champion John Cynn.

Ensan, however, is no slouch at the poker table. He just isn’t a regular WSOP grinder. Prior to Tuesday’s title, the Iranian pro won  over $2.6 million in live tournament cashes. He’s now sixth all-time money among Germany residents, passing Koray Aldemir.

The Main Event final table began on Sunday with Ensan holding a massive chip leadand 34 percent of the chips in play to start. He demonstrated near-flawless big stack poker throughout most of the final table, especially on Monday night when he ran over the competition with an aggressive betting strategy that his smaller-stacked opponents simply could not defeat.

When the final three players returned on Tuesday, the eventual champ held over 60 percent of the chips in play. But Ensan’s massive chip lead quickly shrunk during the final session. At multiple points, including during heads-up play, Sammartino had overtaken the lead.

Livingston was the first elimination Tuesday, busting third overall, with A-J in a pre-flop all-in against Ensan’s A-Q. The best hand held up as it often did at the final table, strangely enough.

That elimination set the stage for Sammartino and Ensan to battle it out for poker supremacy. After four hours of back and forth play action concluded on the 301st hand at the final table. Sammartino moved all-in with a suited 8-4 on the turn with a flush draw and was snap-called by Ensan’s pocket kings.

Needing a spade on the river, Sammartino got no help. Ensan’s kings held up and the 2019 World Series of Poker officially came to an end.

“I am so happy. I am so happy. I thank my fans at home in Germany, also in Iran and my fans, my buddies here,” the champ said in his post-game interview. “This is the best feeling in my life. Unbelievable!  I am so happy, I’m here with the bracelet in hand. What can I say?”

With a second place finish worth $6 million, Dario Sammartino became Italy’s all-time winningest tournament player with $14.4 million in cashes. He surpassed Mustapha Kanit, who was on his rail throughout the final table. Still, he felt a bit of disappointment, which showed as tears flowed following the missed flush draw after he came so close to becoming the next world champion.

Hossein Ensan didn’t have the biggest rail at the final table with all of his friends and family back home in Germany and Iran. But he earned the respect of the poker community for his classy demeanor and impressive play over the previous week. Many poker pros, including former champions such as Phil Hellmuth, tweeted congratulations to the new poker world champion.

Ensan deserves it. Great blend of controlled aggression and some pure street poker. That lead/call by him last night vs. Gates was what happens when you just know your opponents extremely well. Strategy over mathematics ?. #welldone

And with that, we say so long, farewell, to the 2019 World Series of Poker. It’s been another exciting summer but all good things must come to an end. Congrats to the new champ.

Do they really get al the money in cash right away or is that just for the show?
Cause that seems kinda dangerous and impossible to bring home to Germany on a plane etc.