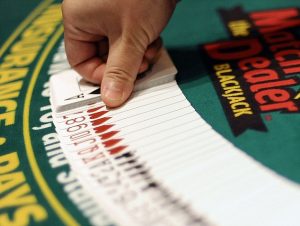 A Horseshoe Casino Cleveland poker dealer has been sentenced to 18 months probation and 250 hours of community service after stealing chips from the Ohio-based property at which he worked.

Randall White, a former poker dealer at the Horseshoe, was arrested in 2015 after his employer caught him stealing chips from the table.

According to reports, White’s daughter was in trouble with the law and he was in need of extra cash to help cover her legal expenses. After he allegedly witnessed a number of employees stealing poker chips, White decided to try the same thing in order to supplement his income.

In order to remove the chips from the table without arousing suspicion, White was taking chips worth $5 and $10 from the dealer’s chip tray and counting them as if they were his tips. The ploy worked for a number of months before the Horseshoe Casino’s security team finally caught up with him in June of last year.

“He saw people stealing cash and tokens and thought he could get away with it as well,” said White’s attorney, Shirley Asale. Although we’re no legal experts, we’re pretty sure that defense has never worked in the history of mankind.

After being arrested and fired from his job, White appeared in court in January to face felony charges relating to gambling infractions and theft. With the prospect of six years behind bars a possibility, White admitted his guilt and apologized for his actions.

In reviewing the case and the fact White stole just $711, Judge John D. Sutula decided to show some mercy and sentenced White to the 18-month probation, as well as community service.

Additionally, White was required to hold down a job during his probationary period (presumably not at a casino) and submit to random drug testing.

Another Case of Cleveland Casino Crime

As highlighted by his attorney, this isn’t the first time an employee at the Horseshoe Casino Cleveland has been arrested for alleged cheating.

Back in September 2015, Robert D. Brown was accused of deliberately trying to cheat his employer after he was found with a card up his sleeve.

As for the latest poker dealer from the Horseshoe accused of a crime, White has been working as a restaurant manager in Middleburg Heights since he lost his poker dealer job and, by all accounts, he’s been keeping his nose clean so far.