Hope Builds for Online Poker in Pennsylvania, Senate has Three Days to Act 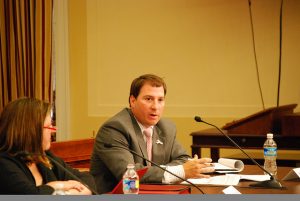 The executive director of the Poker Players Alliance called on Pennsylvania lawmakers to act sooner rather than later at a hearing in Harrisburg this week. (Image: flickr.com)

Online poker could be legalized in Pennsylvania before Wednesday, when the 2016 legislative session comes to an end.

Or it might have to wait in line. But a court ruling last month may prove to be the catalyst online poker needs, and the signs in Harrisburg are positive.

Representative John Payne’s bill to regulate online poker and casino gaming was combined earlier in the year with a wider gambling expansion package that includes the authorization of slot machines in airports and off-track betting locations.

Meanwhile, projected revenue from casino expansion, including online poker and casino gaming, to the tune of $100 million, has been written into the state budget.

The gambling expansion package was approved by the House in June just before the legislature broke for the summer. The bill is now with the Senate, which has just three days to pass it. Not so good.

But a Pennsylvania Supreme Court ruling in September, relating to local casino taxes, has ramped up the urgency to get business done this fall.

The court ruled that tax laws governing revenue sharing agreements between casinos and their local communities were unconstitutional.

The “local share” tax, or “slots tax” dictates that all casinos, apart from those in Philadelphia, Nemacolin and Valley Forge, must pay$10 million a year to their host municipalities, or two percent of slots revenue, whichever is the greater. This meant that certain casinos were paying larger tax bill than others while generating less revenue. Not fair, said the court.

The ruling has created a $140 million hole in the revenue share local communities receive from casino gaming and the legislature wants to plug it as soon as possible.

Now there’s a concerted push to get all gambling issues combined and finalized before Wednesday.

“This adds a new wrinkle, but it’s probably an opportunity to maybe bring gaming as a whole to a head and resolve both issues at the same time,” said House Majority Leader Dave Reed (R-Indiana).

John Pappas, executive director of the Poker Players Alliance, was invited to a hearing on Wednesday in which he urged the legislature to act quickly.

“There is no policy or political justification for delaying regulation of Internet gaming in Pennsylvania. Each and every day that the Commonwealth goes without regulation is another day that consumers are left unprotected and revenue is left on the table,” he said.

“Doing nothing is simply not an option; Pennsylvania consumers and taxpayers have waited long enough.”