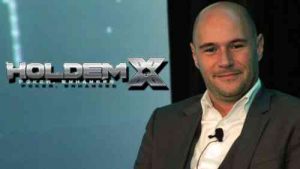 Alex Dreyfus believes that HoldemX is the “missing link” between poker and Hearthstone. (Image: calvinayre.com)

HoldemX might sound like a PG-rated version of the card game we all know and love, but it’s actually a new twist on Holdem with a very specific purpose.

Alex Dreyfus, a man who has often warned of the need for poker to reinvent itself in order to survive, has reinvented poker. The entrepreneur has created a new game aimed at the millennial generation, a demographic segment weaned on computer games and a device for absolutely everything.

The new game, which is currently in the alpha testing stage, is part of Dreyfus’ vision to merge poker with elements of social gaming, esports, and real sports in order to drag it kicking and screaming into the modern age. In short, to present poker to the “next generation of gamer,” in Dreyfus’ own words.

HoldemX is a souped-up version of Texas hold’em that seeks, according to Dreyfus, to “bridge the gap between poker and Hearthstone.”

“We believe that after 12 years, the online poker industry, across social, freemium ‘real money’ corridors, needs to adopt new, fun and innovative games in order to bring back disengaged players and effectively target new generations of gamers,” he said.

“HoldemX brings more drama, more action and more fun without straying from the skill-based foundations of what makes poker unique.”

Dreyfus has said that the rise of games like Hearthstone pose an existential threat to the poker industry. The digital turn-based card game set in the World of Warcraft universe has attracted 30 million registered users since its release in March 2014, essentially acquiring the equivalent of 40 percent of PokerStars’ entire user base in just 18 months.

The kids, it seems, are just not down with poker anymore, and Dreyfus wants to bring them back into the fold.

So how does HoldemX work? Well, you can see for yourself by signing up to the holdemx website and checking out the walkthrough video. You can also leave feedback on the site, which is exactly what Mediarex is after during the alpha testing phase.

In the meantime, we’ll endeavor to explain. HoldemX uses the fundamental elements of hold’em with the addition of 15 “xcards,” which players can use to manipulate the game and confound their opponents. Xcards have specific powers, like changing a heart to a diamond or re-dealing the river card. But added tricksterism comes with players being able to block their opponents from using three xcards from the pool of 15.

Mediarex plans to popularize the game through the GPL, and the formation of an additional GPL X league, which would pit top poker players against top esports players. As with the GPL, live GPL X matches would be played inside The Cube, an esports-style glass case that isolates players while beaming hole cards and live data to spectators outside-looking-in, while reportedly not allowing those inside the cube to see anything beyond its walls.

The company also said it would license the game to online poker operators sometime in the future.

I just watched the video on their site. Very interesting and looks fun. Not sure if I’d wager though…

I watched the video and didn’t understand it. I need to watch it again. It appears there are too many unknowns in the game to play it with a +ev. Perhaps they are hoping recreational players will play it for money?