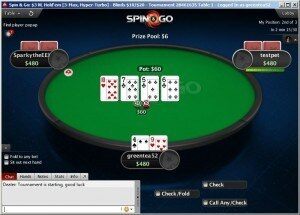 Spin & Go tournaments offer randomly assigned prize pools, some of which can pay out thousands of times the buy-in to the winner. (Image: winallpoker.com)

Spin & Go tournaments have proven to be a controversial addition to the PokerStars lineup.

While they’re certainly made plenty of money for owner Amaya Gaming, professionals and regular players bemoaned the fact that recreational players flocked to the lottery-style tournaments in huge numbers, taking them out of their preferred stomping grounds.

Worse still, these players said, it wasn’t worth following them: the super-fast format left very little skill in the game, and combining that with the huge variance that comes with the randomly assigned prize pools, they simply weren’t worth playing for serious grinders.

But at least one high-stakes player believed that even Spin & Go tournaments offered an opportunity for profit. Now, over 5,000 tournaments later, it appears that he may have had a point.

Two Plus Two user “bighusla” laid out a challenge on the forum at the end of 2014, saying that over the course of January, he would attempt to play as many of the lottery tournaments as possible and walk away with a chip EV return on investment of at least 8 percent. In the end, he exceeded that target, making a tidy profit in the process.

Profits Made Even Without Luck in Big Prize Pool Tournaments

Because of the variable prize pools, using a chip EV (cEV) metric for the challenge was the only fair way to go: otherwise, one lucky win in a Spin & Go could distort the results even if bighusla “should” have come out behind for the month.

In the end, he was up about 8.8 percent in cEV, and had made about $11,000 over the course of playing more than 5,000 $30 Spin & Go tournaments. Incredibly, he did this without any particularly lucky scores: overall, he actually underperformed when he was lucky enough to get a big prize pool, but played well enough on average to still come out on top.

For bighusla, a regular who typically plays hyper-turbo sit and go tournaments with buy-ins of $100 or more, this wasn’t about winning a few thousand dollars. It was more about showing that even these super quick tournaments were beatable, and about prop bets he had booked on his challenge: bets he won at odds of 3.5-1 against him.

In the end, bighusla found that rather than lacking skill, the Spin & Go tournaments were actually deeper strategically than the hyper-turbo games he was used to playing.

“There are really a ton of dynamics to consider at all times from all positions,” he wrote. “Not to mention the fact that in combination to being a good 3 max player u must be a good [heads up] player as well in order to really crush these games.”

According to bighusla, rather than stick with a strictly game theoretical style of play, he found that he could get better results by exploiting the many mistakes his opponents were making. That, combined with treating every game equally regardless of the prize pool offered, helped him finish just above his target.

Now, he just has to figure out what to do with his prop bet winnings.

“I’m looking for some charity advice on what to do with some of the money that I win if I am able to win this challenge,” bighusla wrote earlier. “I’m currently considering donating 20 new laptops to foster children back home in Brooklyn.”

I was lucky in few of them hit nice win so maybe I’ll go back and play few again. Interesting read!