We all know Phil Hellmuth hates to lose, which is why it’s no surprise that he’s taking another shot at defeating Tom Dwan in a $400,000 grudge match when the two meet for another “High Stakes Duel” later this month in Las Vegas. 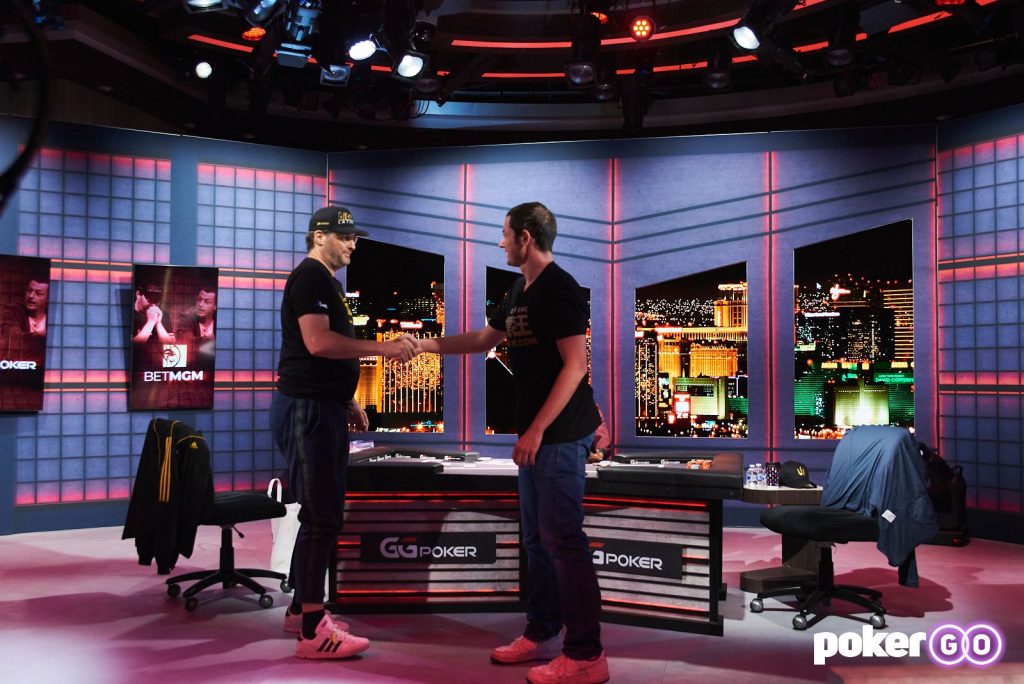 Phil Hellmuth congratulates Tom Dwan at the conclusion of their last “High Stakes Duel” battle. Will the pair be as cordial to one another when they meet again on Jan. 26? (Image: Mark Gorman/PokerCentral)

The two last met in August 2021 when Dwan ended Hellmuth’s seven-match winning streak on “High Stakes Duel.” Prior to that confrontation, Hellmuth had beaten Antonio Esfandiari and Daniel Negreanu in “High Stakes Duel” I and II, respectively.

Nick Wright was the next man up, and he lost to Hellmuth in the first round of “High Stakes Duel III” before electing not to continue. Dwan stepped into the breach for Round 2 and got the job done. Hellmuth subsequently exercised his right to rematch against his longtime rival, which will take place PokerGo’s Aria Studio on Jan. 26.

Doubling down for double stakes

I texted my boy @TomDwan to let him know that I am officially challenging him to a match for $200,000 ($400,000 total) in “High Stakes Duel,” only on @PokerGo App. Tom is a great great poker player, and he beat me last match. I’m sure next round will be a battle! #POSITIVITY pic.twitter.com/ITo0xV6NFP

Hellmuth was complimentary of Dwan following his defeat in August. He tweeted soon after that he wanted the rematch, that Dwan was a “great poker player,” and beating him would be a “battle.”

That’s a markedly different response to the one Hellmuth had when he first lost to Dwan in a TV event. The two famously squared off at the 2008 “NBC National Heads Up Championship” where Dwan was the internet icon transitioning to live events, and Hellmuth was his usual self.

As the above video shows, Dwan cracked Hellmuth’s aces with a pair of tens. That triggered Hellmuth who went on to say that he’d be surprised if Dwan was still around in five years.

He is, and more significantly, he’s got the advantage going into the third round of “High Stakes Duel III.”

While many observers consider Dwan to be the better heads-up player, Hellmuth has consistently shown his skills over the past 12 months. In addition to winning seven “High Stakes Duel” matches in a row, he won his 16th WSOP bracelet in October.

Tournament poker, particularly at the WSOP, might not be a good indicator for success when it comes to heads-up matches. What’s undeniable though is Hellmuth’s form. He’s also had five months to study the previous match and refine his strategy.

Will that be enough to beat Dwan? We’ll find out on Jan. 26. PokerGo subscribers can watch the showdown in Las Vegas on PokerGo.com at 8pm ET. New customers can use the promo code HSD3R3 to get $20 off an annual subscription. For those who aren’t subscribed to PokerGo, the first hour of Hellmuth vs. Dwan will be available for free on the company’s YouTube channel.