Hialeah Park Poker Tournament Controversy Has Players in an Uproar 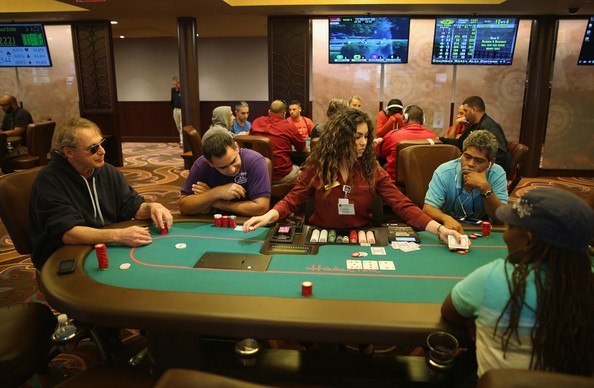 The poker room at Hialeah Park in Miami, Florida: some pretty serious allegations have surfaced about management practices in a recent poker tournament at the casino. (Image: southflorida.com)

Controversy at a recent Hialeah Park Casino poker tournament in Miami, Florida has led players to cry foul. Discrepancies between prize pool figures and the total number of chips in play, as displayed by the tournament clocks, gave some players enough pause to question what the heck was going on.

The math at the casino’s two-year anniversary $250 MTT w/ $200k guarantee simply didn’t add up, and Florida’s poker players have taken to the forums to demand why.

With five starting days with two flights each day between Tuesday, August 25 and Saturday, August 29, this was the biggest tournament, in terms of numbers and prize pool, in the casino’s short history. However, to some players, things didn’t seem to be quite right from the outset.

On  forum site TwoPlusTwo, new poster Bob Bernstein explained that buy-ins and rebuys into the tournament were not exchanged via the casino cage, but at the podium, and the structure sheet was not made freely available to the players.

Alarm bells really started ringing at the beginning of Day 2, when players noticed that the prize pool figures did not tally with the number of chips in play, as posted on the on the tournament clocks.

Equally suspicious, players were continually kept in the dark about the official number of entrants to the tournament, as well as the amount of initial dealer add-ons or 8k Level 9 add-ons.

“The Day 2 chip counts were posted within the poker room on Sunday and stated that the prize pool was $215,002, that there were 163 players returning, and 90 would make the money,” explained Bernstein.

“Chatter began when some people were told by floor staff that the total number of entries was 1061, which didn’t match up with the $215k posted prize pool. Later, the floor staff settled on 966 as the official figure.

“A payout structure sheet was also not provided, however the tournament staff stated that 8% of the field would be paid. But by officially paying out 90 places, that would mean that the field had 1125 entries.

“Why the discrepancy,” Bernstein wanted to know.

Why indeed? A summary investigation conducted by South Florida Poker Players Association, in which members quizzed both South Florida poker regulars and some current and former Hialeah Park employees brought up some pretty serious allegations about the way the poker room is being run.

If correct, it means that the casino has been “under-laying” the players. Whether the allegations are true or not, they provide a plausible explanation for the mathematical anomalies. Meanwhile, the poker room has brought more potential shade on itself through a distinct lack of transparency, with the onus now on its management to explain what’s been going on.

in California , the indian casinos routinely pull similar shenanigans . they just don’t have much outside oversight .

Not good for the reputation of poker. You could see this as a sad result of the unwillingness of the US government to properly regulate poker.