Hellmuth vs. Negreanu Picks to Click: Who Will Win and By How Much?

Enough talking, it’s time to find out which poker legend — Phil Hellmuth or Daniel Negreanu — can back up their mouth and prove to be the superior Heads-Up No-Limit Hold’em player. At 5 pm PT Wednesday on the PokerGO app, we’ll find out who was all talk, and who walks the walk. 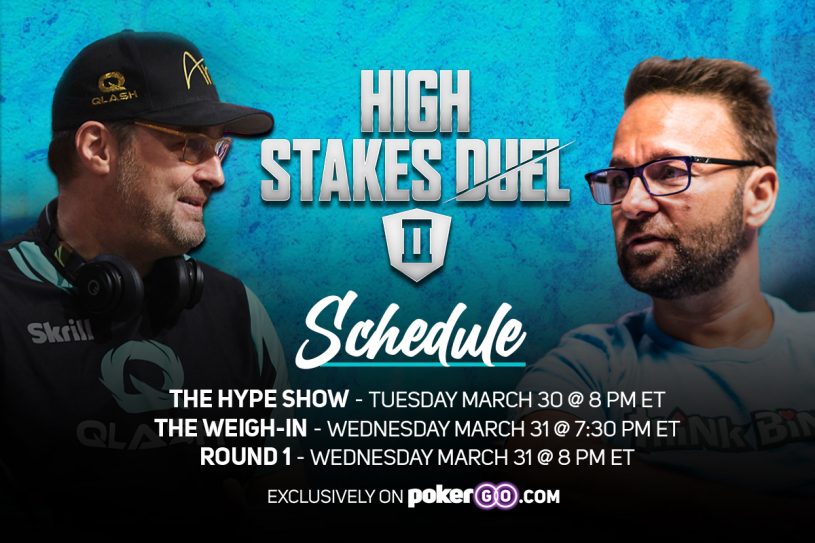 Phil Hellmuth vs. Daniel Negreanu, one of the most anticipated heads-up matches in poker history. (Image source: Poker Central)

The Poker Hall of Famers are competing in the first in a series of heads-up games on High Stakes Duel II. Each player will buy-in for $50,000, creating a $100,000 initial prize pool. The losing player has the option to force a rematch where the stakes are doubled.

If the loser decides to call it quits, the winner can then take on a new challenger. But don’t expect that to happen. Both of these players are well-bankrolled and the odds of either backing out so quickly are slimmer than Negreanu’s recently trimmed down waistline.

The winning player, however, can’t take his money and run until after the third match. So, it’s going to get expensive for one player. Before each match, the player who lost the previous one is the only one required to buy-in. And the stakes are doubled in every game. By Game 3, $400,000 will be in the pot.

And the winner will be …

Negreanu and Hellmuth have a combined 21 WSOP bracelets and more than $67 million in live tournament cashes. But neither player is considered a top heads-up pro, as both lack extensive experience in this format. They each thrive in multi-table tournaments, and we discovered in the Negreanu vs. Doug Polk match that Negreanu’s tournament experience didn’t help much against one of the top heads-up players of all-time (he lost $1.2 million over 25,000 hands).

Losing to Polk was costly, but Negreanu gained some valuable heads-up experience that will likely help him out against Hellmuth. For that reason, and also because of the lack of respect Hellmuth gets from many in the poker community, Negreanu is a fairly heavy favorite (-153, according to PokerShares).

Those odds are certainly reasonable. Negreanu is fresh off a 25,000-hand training session against a heads-up legend. Hellmuth, on the other hand, doesn’t focus on this format of poker.

With that said, variance is going to be a huge factor in this match because they are playing a sit-n-go format as opposed to cash game poker, which was played in Negreanu vs. Polk and most other heads-up challenges. Within an hour or so into the game, you can expect at least one player to be well under 100 big blinds. The smaller the stacks in relation to the blinds, the more variance (luck) becomes a factor.

Hellmuth has something else going for him: he’s quietly crushed it in this type of heads-up format. He won the 2005 NBC National Heads-Up Poker Championship and finished runner-up in 2013. He even beat Polk and Dan “Jungleman” Cates in 2017 in a four-player “King of the Hill” event on Poker Night in America.

Hellmuth also dominated Antonio Esfandiari on the first High Stakes Duel, winning all three matches for a $350,000 profit. At +136 odds ($100 to win $136), there’s certainly some value in betting on Hellmuth.

But Negreanu is simply a superior heads-up player, as he showed in that match against Polk. Although he lost a fortune, he improved drastically throughout the challenge. Even Polk admitted afterward he was surprised at how well Negreanu’s game evolved.

Hellmuth certainly has a shot to win this, and not just because of luck. He’s a better poker player than many pros give him credit for, and his resume backs that up. You can’t fluke your way to 15 WSOP bracelets and $24 million in live tournament cashes. But he’s going to need a ton of luck to beat a player who has been studying heads-up poker for months, even in a sit-n-go style match.

My prediction is that the match will go four games, with Negreanu winning three of them before Hellmuth calls it quits. You can watch High Stakes Duel II on the PokerGO app (paid subscription required) beginning at 5 pm PT on Wednesday. If you miss it, don’t worry, it will be available on-demand afterward.

I got Daniel in this one. His recent match with Doug is going to play a big role here. Negreanu has already been playing heads up at the highest level for months.

When is Hellmuth actually going to get respect from his peers? Took care of Polk, wiped out Magic Antonio and now DNegs.