Hellmuth Beats Polk on PNIA to Advance to Heads-Up Final vs. Jungleman

In a $50,000 buy-in “King of the Hill” heads-up challenge on Poker Night in America Tuesday night, Phil Hellmuth and Dan “Jungleman” Cates advanced to the finals. Representing two generations of young-gun champions, they’ll face off for a $200,000 prize on Wednesday at 5:30 pm PT, in a match that will air live on PNIA’s Twitch channel. 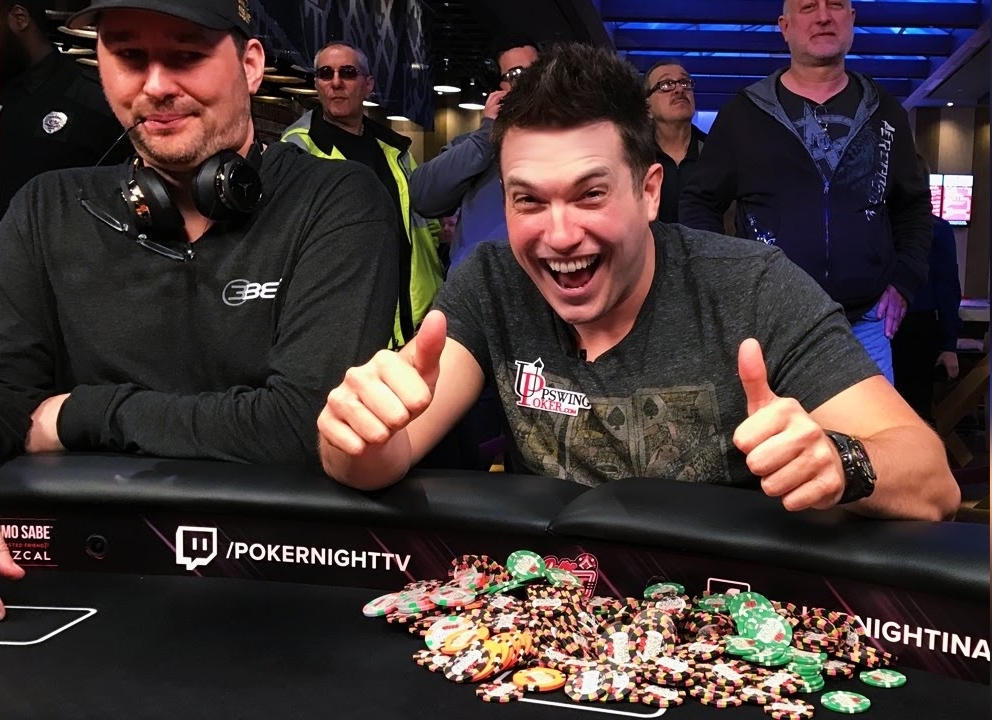 To the surprise of many, Phil Hellmuth (left) defeated Doug Polk (right) in a heads-up match on Poker Night in America’s “King of the Hill” broadcast. (Image: YouTube)

To get to this point, Hellmuth had to defeat Doug Polk, a still-rising star considered by many to be a heads-up specialist. Cates, less surprisingly, disposed of Frank Kassela in his semi-final match, and that happened quickly when Jungleman landed a haymaker against the 2010 WSOP Player of the Year on the fifth hand.

Players started with 50,000 chips, and Cates jumped out to a 2-1 chip advantage when he flopped trips and got called down all the way to the river by two-pair.

Four hands later, Jungleman hit a straight and got Kassela to call off the remainder of his chips. Game over.

With the match over, Cates hopped in the broadcast booth to provide commentary with Shaun Deeb for the match most people wanted to see.

The second match of the evening was the polar-opposite of the Cates-Kassela affair. Hellmuth versus Polk was like a 15-inning baseball game where neither team could get that big hit.

Polk, part of the new breed of poker players and one of the most successful heads-up online pros in history, has long criticized the style of play from the “older” pros such as Hellmuth.

Polk knew he had to win this match lest he face the ire and scorn of his sizable YouTube and Twitter followings. Good friend and social media colleague Joe Ingram was overly confident.

“Okay, if @DougPolkPoker gets beaten by @phil_hellmuth today, I will make a video about how Phil is the greatest in the world this week,” he posted on Twitter.

So where’s the video, Joey?

Hellmuth chipped away at Polk’s stack one pot at a time for more than 90 minutes before, for all intents and purposes, finishing him off on the most memorable hand of the evening.

Slow playing his hand opened a window for the Poker Brat when the 10♥ landed on the turn, giving him a flush draw to go with his gutshot straight draw. Polk again checked and Hellmuth fired a bet of 800 and got check-raised to 3,500. Hellmuth called.

Things got sticky on the river when the 9♦ hit, giving Hellmuth a straight. Polk was forced to check given the four-card straight on board, and Phil put him to the test, betting 11,000 into a pot of 8,600.

Cates, in the broadcast booth, announced Polk had an easy decision to fold. But after tanking for five minutes, the 2017 WSOP One Drop High Roller champion flipped a coin to decide his move. Unfortunately, for the YouTube sensation, the coin told him to make the call.

Polk lost his remaining 3,600 chips the next hand. Hellmuth advanced to the final round to face Cates on Wednesday at 8:30 pm ET (5:30 pm PT) from the Rivers Casino in Schenectady, New York.

A gracious Hellmuth invited Polk out for consolation drinks following the match. He then spent his post-match interview letting everyone know how amazing he is at poker and that he continues to crush the younger pros that underestimate him.

“I called my wife up, I said ‘honey, all these people think I’m a dog,’” he said in the interview, before bragging about how poker players underestimated him before he crushed the 2005 National Heads-Up Championship field against the “greatest players.”