Phil Hellmuth and Patrick Antonius will join Phil Ivey, Doyle Brunson, and others for a star-studded small-stakes meet-up game to help kick off the Word Poker Tour World Championship series that starts Thursday, December 1. Poker fans are invited to head to the Wynn at 10 a.m. PT on Thursday for what the WPT is calling the Premier Meet-Up Game: WPT Poker Icons Experience. 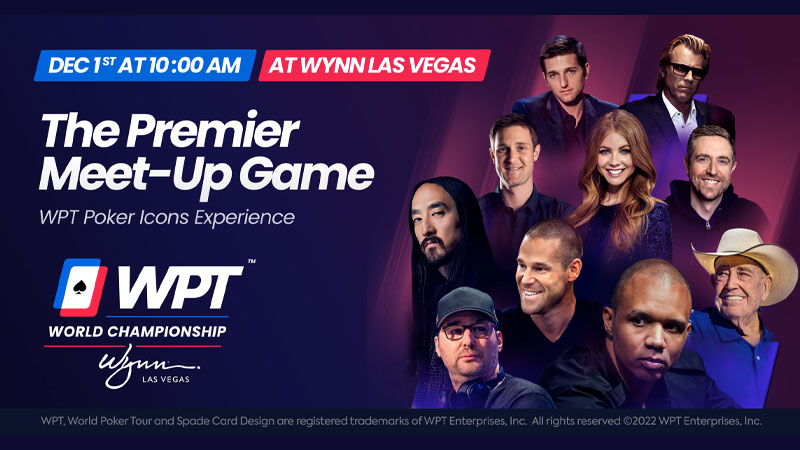 Joins the WPT stars at the Wynn on December 1. (Image: WPT)

“When I heard that Phil Ivey and Doyle Brunson were playing in this MUG, I knew I had to get involved,” said Hellmuth, through a WPT press release on Wednesday. “I’m excited to play with the WPT family. Hopefully, no one gets me with a bad beat.”

Called a MUG for short, these gatherings are casual poker parties that allow fans to hang out and play with players they normally only see handling tens of thousands of dollars worth of chips on live streams or on television. The stakes for Thursday’s No-Limit Hold’em and Pot-Limit Omaha games will be $1/3 and $2/5 — stakes the 45-year-old Ivey most likely hasn’t played since at least high school.

MUGs were created by vloggers Andrew Neeme and Brad Owen, both of whom were hired by the WPT as ambassadors this spring. The two have been hosting MUGs for the WPT all year at card rooms from Las Vegas to Cambodia.

“This MUG is going to be epic. If you are in Vegas, you have to make it to the Wynn,” Owen said in the same press release.

The WPT added “icons” Brunson and Ivey to its roster of ambassadors as part of its 20th season. Ivey joined earlier this month, while the 89-year-old Brunson came aboard in June. Hellmuth has been part of the WPT family since 2017.

The WPT also named DJ and influencer Steve Aoki as an ambassador this year. Like Neeme and Owen, he’s been making himself available to poker fans by showing up at MUGs and WPT events. He was also part of a promotion on Club WPT — the brand’s online poker site — that flew winners to Vegas to play in his home game.

Aoki will also be at Thursday’s MUG, along with many members of WPT’s poker family, including Tony Dunst, Vince Van Patten, Matt Savage, and Ashley “PokerFace Ash” Frank.

As an additional bonus, any player who is part of an “all-in and call” hand with one of the WPT’s ambassadors or its on-air talent will be entered into a raffle for a $10,400 WPT World Championship seat.

A December to remember

The WPT World Championship series runs from December 1-20. The 24-event festival is headlined by the $15 million guaranteed Championship that begins December 12. The eight-day, $10,400 event has three starting days and its final table will be filmed for broadcast.

It’s the largest guarantee in live poker tournament history, surpassing the $10 million guarantee mark set in Florida 10 years ago. If the guarantee is missed, it falls on the casino to make the prize pool right, so the Wynn is counting on at least 1,500 entries, which it should easily see.

The three-day $1,100 Ladies Championship coincides with the Women in Poker Hall of Fame’s week of celebrating its class of 2022. The final table will be filmed for broadcast.