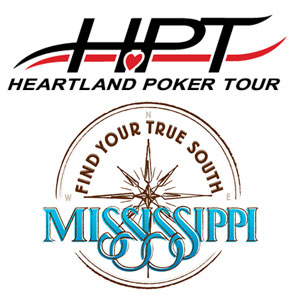 After only a few days into its first events, the Heartland Poker Tour announces that Mississippi will be added to the schedule of upcoming stops.

Touring the Heartland of America has certainly become second nature for the Heartland Poker Tour (HPT). With nine seasons already under its belt, HPT continues to add more stops to the already exciting schedule of Season X. Mississippi is the newest state to be included and will be the HPT’s first visit to The Magnolia State.

Mississippi’s first brush with Heartland Poker Tour is expected to bring in hundreds of players and participants from across the United States. Starting on March 13, the Ameristar Casino in Vicksburg, Mississippi will play host to HPT. The stop will conclude on March 24 with a nationally-televised Main Event Final Table.

The action starts with a $250 buy-in No Limit Hold’em Deep Stack tournament. Other events in the schedule include Turbo NLHE tournaments, Limit Omaha 8 and various Multi-Table Qualifiers for the Main Event. On Friday March 21, the $1,650 buy-in Main Event will begin, but players can advance through affordable satellite opportunities in hopes of entering. During a previous stop in Missouri, a $60 satellite entry turned into a third place finish with $57,456, so the chance is definitely possible. The top prize for the event at the Ameristar Casino is expected to be in the six figure range.

The Ameristar Casino Hotel Vicksburg is perfectly suited to hold the excitement of HPT. Located in central Mississippi, the 70,000 square foot casino will provide a dockside view for visitors. Ameristar is also equipped with 1,500 slot machines and 27 table games. Dining options at the casino, such as Bourbon’s BBQ & Steak, Heritage Buffet and Bella’s Bakery & Café, also bring in visitors looking for that special feel of southern hospitality. Guests who stay at the 149-room hotel can also experience a Delta-styles blues club atmosphere at The Bottleneck Blues Bar.

“We are excited about the incredible opportunity to host the Heartland Poker Tour at Ameristar Vicksburg,” said George Stadler, Vice President and General Manager of Ameristar Casino Hotel Vicksburg. “It is an honor to have a nationally televised event for our guests, team members and the city of Vicksburg.

HPT’s inclusion of Mississippi into their schedule continues the success of the tour’s move through the western United States. In 2013, HPT added a series of stops in California while also visiting familiar locations such as Michigan and Oklahoma. Three of the stops before Mississippi actually take place in California. Currently, the Thunder Valley Casino Resort event is underway with the Club One Casino stop taking place on January 31. The rapid expansion of HPT in California speaks to the success of further stops across America.

Season nine of HPT broke records by awarding over $50 million in prize money. Additionally, the tour saw its television distribution expand to Europe, the Caribbean, the Middle East, North Africa and Asia. Because of this, the highly televised HPT events will reach out to more than just the 100 million homes across the United States it traditionally airs in.