Heads-Up for King of the Hill II: Hellmuth vs. ‘Tonkaaaa,’ Busquet vs. Deeb 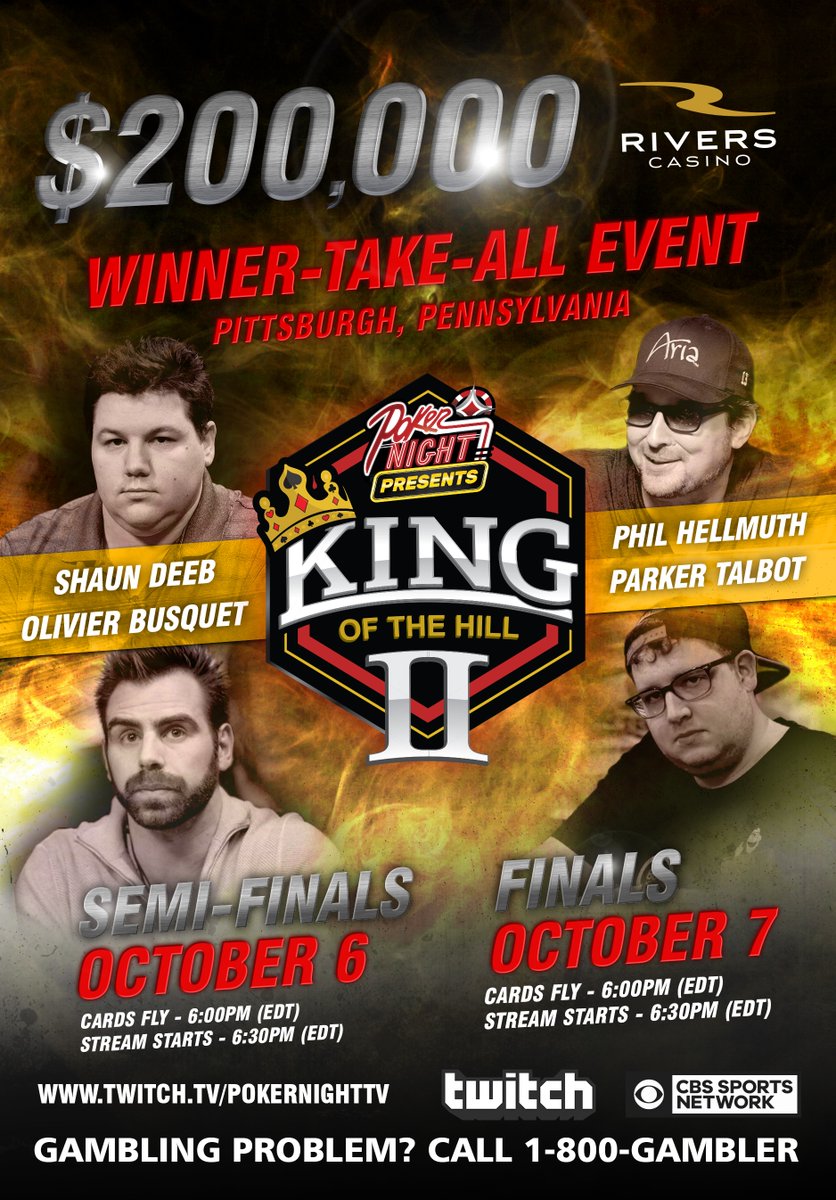 Phil Hellmuth returns to King of the Hill on Poker Night in America Oct. 6 to defend his title against Parker “tonkaaaap” Talbot, Shaun Deeb, and Olivier Busquet. (Image: Twitter/@pokernighttv)

The winners will meet up the following day to determine a champion and who takes home $200,000.

In the first King of the Hill last month, Hellmuth used his “white magic” to defeat two of poker’s most accomplished heads-up players, Doug Polk and Dan “Jungleman” Cates.

The Poker Brat was an underdog heading into the contest despite having one of the all-time best tournament resumes. But he needed to beat two players who have won millions of dollars online in the heads-up format.

Hellmuth pulled off a miraculous rally to win the first King of the Hill, adding a wrestling belt trophy to his 14 WSOP bracelets.

In the championship match against Cates, Hellmuth faced a 195,000 to 5,000 chip disadvantage in the third and final game. But white magic, referring to his self-proclaimed ability to read opponents at any time, never dies.

Now he’s back to defend his title against three new players, with the action streaming live on “Poker Night in America’s” Twitch channel beginning at 3:30 pm PT. Doug Polk will be in the booth providing commentary.

Hellmuth will have to be on top of his game if he expects to defend his title. In his first match, the he’ll face an internet poker legend and Canadian 888poker pro, who is perhaps best known for his streaming on Twitch as “tonkaaaa.”

Parker Talbot, as his parents call him, could be out of his element in this heads-up format. But that’s what many so-called experts said about Hellmuth last month before he won King of the Hill.

Talbot is a multi-table tournament specialist, often competing in 3-4 games at the same time, usually live on his popular Twitch channel.

If Hellmuth defeats tonkaaaa, he’ll face either Busquet, known for crushing high-stakes online heads-up matches for years, or Deeb, who has had success both live and online.

Deeb is a bit of a wild card in this tournament. He’s a regular on “Poker Night in America” and has more than $2.8 million in live tournament winnings. But can he hang with Busquet one-on-one?

And in This Corner …

Hellmuth, of course, needs no introduction. Poker players know all about his record 14 WSOP bracelets, 1989 WSOP Main Event title, and that he’s won millions of dollars in live tournaments, $21,963,463 to be exact.

But the Poker Brat also won the 64-player NBC National Heads-Up Championship, a nationally televised tournament that lasted eight seasons, in 2005, and finished 2nd in 2013. Even after claiming the King of the Hill title last month, he still has haters in the poker world who doubt his heads-up ability, as well as his understanding of how pros from a younger generation play.

He’ll have another shot to prove them wrong next week.

tonkaaaa is terrible heads up lol