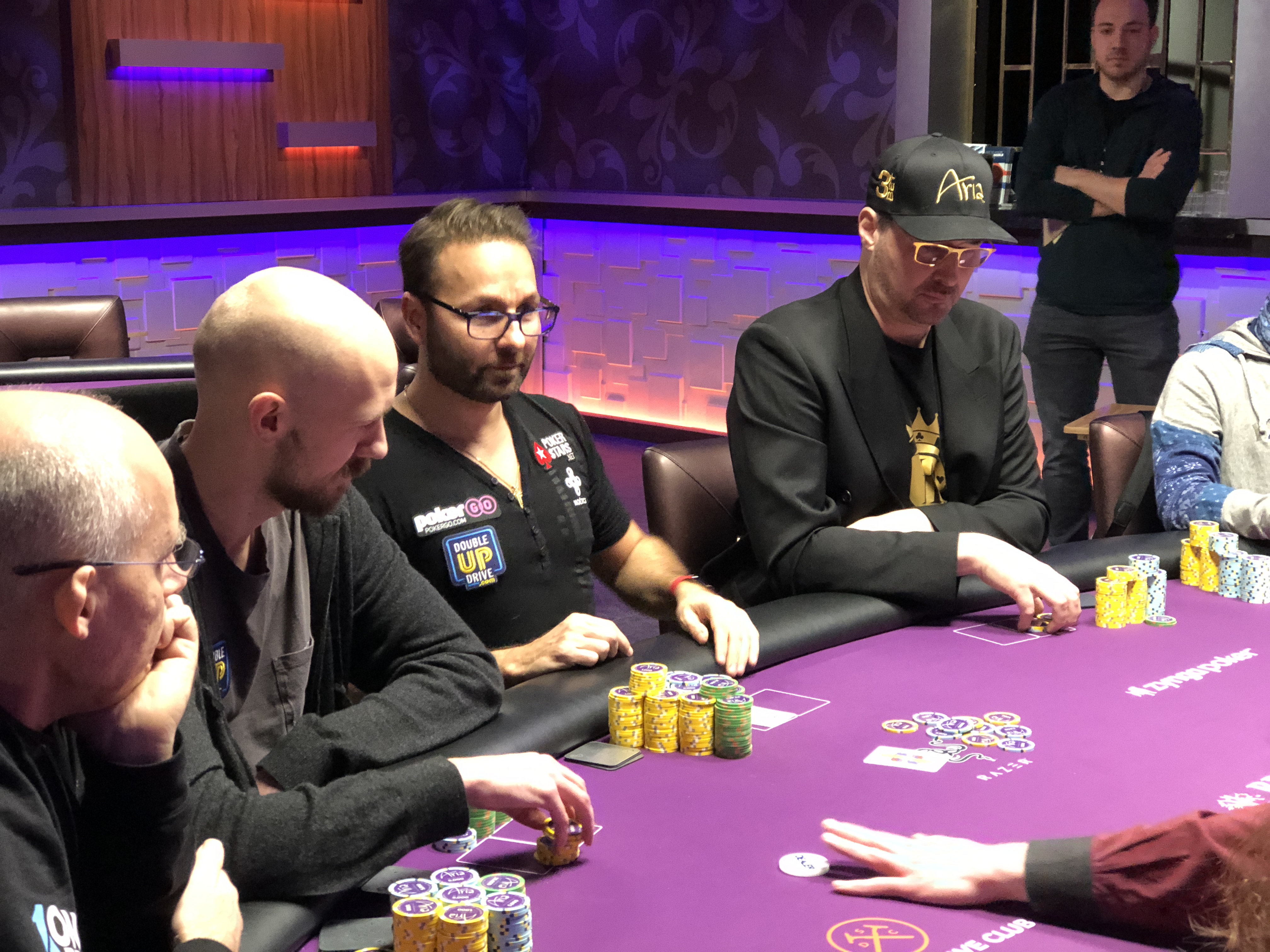 Caught between GTO and White Magic? Daniel Negreanu was cruising along in the Super High Roller Bowl until making a questionable play with a middle pocket pair against Stephen Chidwick (second from left). (Image: CardsChat News)

Mikita Badziakouski also won’t be back for Day Three, not after losing a race against Chidwick on the money bubble to conclude Tuesday’s session.

Phil Hellmuth, Justin Bonomo, Fedor Holz, and Day One chip leader Rick Salomon were also among yesterday’s 20 eliminations. Holz suffered a tournament-ending bad beat with Q-2 on a Q-2-7 flop against Negreanu’s A-Q. All the chips were in the center of the pot on the flop. But a 7 hit on the river, counterfeiting the German’s flopped two-pair.

Don’t Try this at Home, Kids

Negreanu, however, didn’t do much with Fedor’s chips other than give them away. After making the fold of the day (year?) on Monday — laying down the nut straight to Badziakouski’s rivered full house — he made a questionable play on Tuesday that cost him his entire stack.

The 9 on the turn gave Chidwick top pair so he confidently led for 150,000. Kid Poker went into the tank and surprisingly decided to ship his remaining 444,000 chips in the pot.

Chidwick pondered his next move. It wasn’t an easy decision given both players were close in chips. But after a brief pause, he made the call and won the pot after a blank landed on the river.

Negreanu, the SHRB runner-up in May, was sent home in ninth place, two spots off the money.

Cause I wanted him to spazz out against it. He did. Then he got there. Ouch ?

“I wanted him to spazz out against it,” Negreanu wrote. “Then he got there. Ouch.”

Perhaps, Negreanu’s play wasn’t as bad as it seems at face value. If any card other than a 9 or 10 hit on the turn, he likely would have won a big pot. Instead, he was out just short of the money.

Coincidentally, Chidwick won another massive pot earlier in the day with 10-9. In that hand, he hit top pair and faded Salomon’s flush and straight draw.

Ike Haxton is a high-roller regular with $20 million in lifetime earnings. And he has a chance on Wednesday to book the biggest score of his career, with nearly $3.7 million going to the winner.

Haxton holds a slim chip lead over Chidwick with seven players remaining. Alex Foxen, the GPI Player of the Year leader, had a massive chip lead midway through Day Two. But he trended downward the rest of the evening.

Aggression pays off more often than not, but it didn’t work for Foxen on Tuesday. His bluffs often ran into big hands and he finished with barely half the size of his stack he had earlier in the day. Still, he has plenty of chips to make a run at the SHRB title today.

Play resumes at 1 pm PT on Wednesday. They’ll play down to a winner. Each player is guaranteed at least $540,000. You can watch the action live on the PokerGO app (subscription required).

no one can fold this that nut straight easily, there is only one kid poker, good reading.

Negreanu played it right. He has been one of my pro favs for awhile. Too bad, the AQ did not hold up for him. Those hurt. I wish the best to those left in the tournament. AQ is borderline strong and weak. It is a hand that can bring accolades and can bring sorrow. I have experienced both.

Chidwick and Haxton match followed by Foxen and Kurganov looks to be quite a match-up of the top 4. Anything can happen with it being that tight and competitive!