While visitors flock to Hawaii every year for a tranquil vacation, the islands are no paradise for those looking to gamble. The state has some of the toughest anti-gambling laws in the US, and is in the midst of a major crackdown on illegal card rooms and gambling dens filled with video poker, slots, and other illicit arcade-style gaming machines. 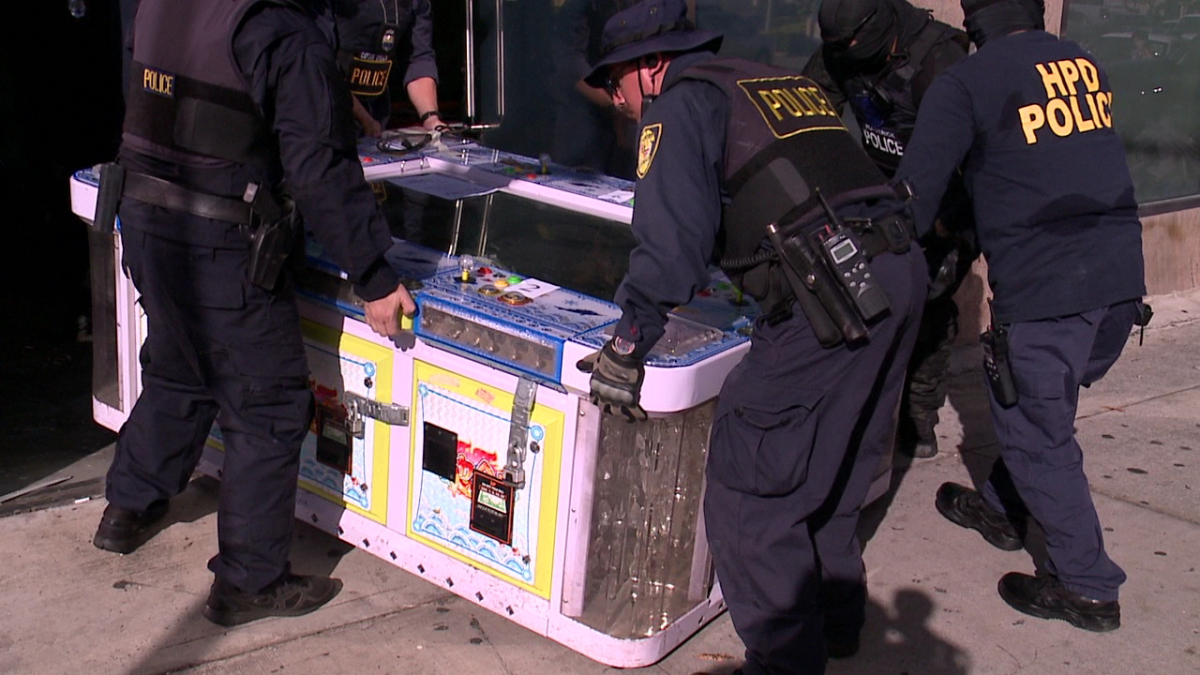 Honolulu police remove a multiplayer arcade game that has become one of the more popular gambling options in Hawaii. (Image: KHON2)

Over the last few months, the Honolulu Police Department has been conducting raids and so far have arrested 35 people on gambling-related charges.

Last week, HPD held a press conference announcing their intent to continue the raids, saying they know of 100 different locations where illegal gambling is going on, and warned operators that they were coming soon to shut them down.

“Game rooms affect people of all ages and socio-economic levels,” Major Larry Lawson of the HPD criminal investigation division said at a recent press conference. “We sometimes hear people say that gambling is harmless form of entertainment, however we know that game rooms are often the hubs of illegal activity such as drug dealing, robberies, assaults and homicides have been associated with game rooms.”

Gambling in Hawaii is a misdemeanor, but more severe penalties apply to people who work at places where gambling is occurring, as well as for landlords who hold property leases.

Raids of underground game rooms have been happening in Honolulu’s Chinatown and urban areas around the island for years, but the police focus has stepped up in 2017.

Authorities say reports of armed robberies, stabbings, and shootings in and around these gaming locations prompted the crackdown. In August, police conducted 20 raids in a single night, netting 20 arrests, including an escapee from the Oahu Community Correctional Center.

Hawaii has some of the most restrictive gambling laws in the country. The Aloha State doesn’t even have a lottery. Only “social gambling” for no money in private homes is allowed.

But recent legislative measures are attempting to change that, at least online. State Sen. Will Espero introduced Internet Gambling Bill SB 677, which would legalize an online lottery, casino games, and poker. The bill lays out plans for establishing a regulatory framework, and earmarking tax revenue it would create for education coffers and problem gambling.

“Neither federal nor Hawaii laws currently provide any consumer protections for Hawaii residents who play on these web sites,” Espero wrote in the bill. “Tens of millions of dollars in 2017 revenues generated from online gambling are being realized by offshore operators serving Hawaii residents, but no benefits are provided to the State.”

The legislation languished in the Senate Government Operations Committee, however, and ultimately went nowhere, as have previous attempts to expand gambling on the island, including a bill in 2011 to legalize live poker.

That bill proposed establishing a “Peer-to-Peer Entertainment Commission” in Hawaii to license real-money tournaments and rake-free cash games. The House approved the bill, but it died in the Senate chamber when they decided not to act further on it.

1 in 6 Hawaiians live in poverty. Why not legalize gambling, reap the huge benefits of tourist money, and give back to the poor? Maybe give college scholarships to needy students with decent grades?