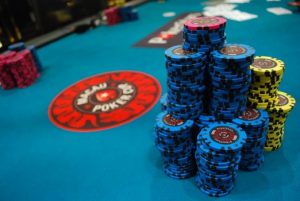 The Macau gambling industry has taken a hit for the 19th straight month, and it could harm the Asian poker market. (Image: Calvin Ayre)

The Macau gambling industry has long been Asia’s version of Las Vegas. Some would argue the popular tourist destination in China is more appealing than Sin City.

Macau remains a chi-chi gambling town with many high-stakes casino games and fancy hotels. But if recent trends are any indication of what the future may hold, Macau’s top revenue stream could be in trouble, and that isn’t good for the game of poker.

Gambling revenue in the city fell to a five-year low in 2015, a direct result of a struggling Chinese economy.

Macau is one of the most visited cities in China, relying heavily on tourists from all over the world, but still feels the impact of financial issues throughout the country.

Macau’s Gaming Inspection and Coordination Bureau said it received $28.93 billion from local casinos. That would seem like a significant amount of money if not for the fact that the revenue was down 34.3 percent from 2014.

Macau closed out the year with its 19th consecutive month of declining revenue. The city can no longer chalk it up to a small sample size or a bad few months. This is now a concerning trend and, with the Chinese economy continuing to struggle, there is no end in sight.

Phil Ivey and Tom Dwan are two of the most prominent high-stakes poker pros who are known regulars in the biggest cash games in Macau. They spend time in local casinos due to the number of wealthy businessmen that are considered “easy money.”

Ivey, a 10-time World Series of Poker bracelet winner, was non-existent most of last summer at the WSOP in Las Vegas. Why? It was rumored he spent that time playing cash games in Macau.

The impact of the city’s declining gambling industry goes beyond games such as slots, blackjack, and craps. Poker in Macau has also been negatively affected, much like how American poker rooms took a hit when the US economy crashed back in 2008.

Players such as Ivey and Dwan have remained silent on where they will play in the future if Macau poker rooms fall apart, but some poker pros have already taken their chips to Malta.

What the Future Holds

After 19 straight declining months, the only thing certain is there is a problem in Macau. Until the Chinese economy picks up, gambling revenues will be down.

However, experts don’t appear to be too concerned that Macau’s gambling industry will end up crashing at the level of what happened to Atlantic City over the past decade.

A city such as Macau relies so heavily on gaming revenues. Studies have shown that 25 percent of all visitors to Macau come to gamble.

The Macau Millions, one of the top Asian poker events of the year, is underway right now, running through January 18th. The number of entrants in this poker series could be a good indication of how much the Macau gambling decline may affect the Asian poker market.