It’s been a rough week for Hollywood producer Harvey Weinstein. Not only has he lost both his job and wife after The New York Times and The New Yorker ran scathing exposés detailing decades of sexual harassment, but the blowback is affecting others with ties to the poker community, including actors Ben Affleck and Matt Damon of Rounders fame, who have both played poker in real life as well. 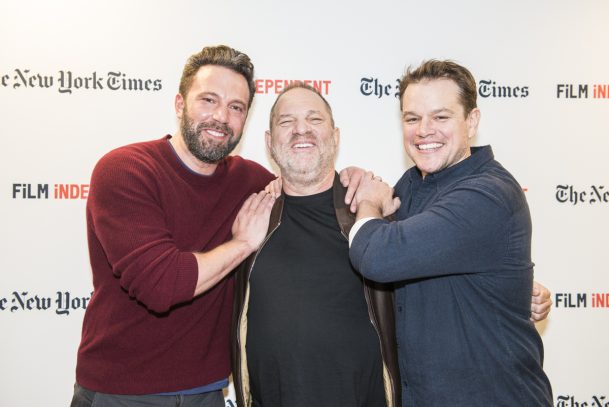 Harvey Weinstein (middle) helped build the careers of Ben Affleck (left) and Matt Damon (right), but this week’s scathing sexual misconduct allegations have come back on both of them as well, with Affleck being hit with his own past misdeeds. (Image: People)

Downfall of a Kingpin

Allegations of rape, abuse, and harassment, which have come from interns all the way up to high-profile actresses such as Angelina Jolie and Gwyneth Paltrow, quickly knocked one of Hollywood’s power players off his perch at The Weinstein Company, which he founded with his brother Bob Weinstein.

The brothers also established Miramax Films, which was responsible for the cult poker classic Rounders. Other influential films produced by the pair include Pulp Fiction, Shakespeare in Love, and Gangs of New York. They also produced Good Will Hunting, starring future stars Matt Damon and Ben Affleck, both of whom have come under fire in recent days.

The laundry list of allegations, many of which Weinstein has since conceded to, basically boil down to the intimation that for three decades he used his power and influence to coerce interns, aspiring actresses, and other women in the industry to do his sexual bidding in the hopes that he would further their careers.

Rumors about Weinstein have persisted in Hollywood for years. The hefty producer reached several settlements with accusers in the past. Apparently, such transgressions were highlighted in a personnel file at The Weinstein Company.

Recently, reports surfaced that Harvey Weinstein believed his brother was responsible for his downfall after leaking that file to The New York Times.

“My brother Harvey is obviously a very sick man,” Bob Weinstein told celebrity gossip show TMZ in response. “I’ve urged him to seek immediate professional help because he is in dire need of it. His remorse and apologies to the victims of his abuse are hollow. He said he would go away for help and has yet to do so.”

According to former NYT reporter Sharon Waxman, Damon was among those who helped shut down a 2004 article she had written about Weinstein’s misconduct. She alleges Damon called her directly and used his influence to get the paper to remove some of the more scandalous details.

As a result, both Rose McGowan and Jessica Chastain, the latter of whom stars as Molly Bloom in next month’s poker movie Molly’s Game, publicly decreed him an enabler. Both Damon and the NYT have denied the allegations, and the former even released a statement which Waxman later endorsed.

In it, Damon admits to making a phone call at Harvey Weinstein’s behest, but said it was done without his own full knowledge of the situation. Damon claimed that he only made the call to relate his professional experience working with Fabrizio Lombardo, who ran Miramax’s Italian office and was recently alleged to have secured women for Weinstein.

“My recollection was that it was about a one-minute phone call. Harvey had called me and said, they’re writing a story about Fabrizio, who I knew from The Talented Mr. Ripley,” said Damon. “Harvey said, Sharon Waxman is writing a story about Fabrizio and it’s really negative. Can you just call and tell her what your experience with Fabrizio was. So I did, and that’s what I said to her.”

Likewise, Affleck, who played the villain in the 2013 poker flick Runner Runner (not a Weinstein Company production), found himself in the crosshairs this week after sending out a tweet condemning Harvey Weinstein. McGowan immediately responded with accusations that Affleck was well aware of Weinstein’s behavior and even warned her of it in the past. After first telling the star to “f**k off” in a tweet, she later posted:

“@benaffleck ‘GODDAMNIT! I TOLD HIM TO STOP DOING THAT’ you said that to my face. The press conf I was made to go to after assault. You lie.”

Affleck, who won the 2004 California State Poker Championship for $356,400, has yet to respond to McGowan or comment further.

But Affleck is now facing his own bad boy crisis, which broke on Wednesday as the saga’s tentacles threatened to bring down half of Hollywood. After admitting to an on-camera incident in 2003, in which he groped 21-year-old and then-MTV Total Request Live host Hilarie Burton’s breast, Affleck tweeted out this morning, “I acted inappropriately toward Ms. Burton and I sincerely apologize.”

The day before, McGowan had raked Damon over the coals as well with this tweet: “Hey @mattdamon what’s it like to be a spineless profiteer who stays silent?”

In another poker connection, Gretchen Mol, who costarred with Damon in Rounders, penned a guest column for The Hollywood Reporter in which she addressed long-standing rumors about her interactions with the fallen producer.

“No. I did not exchange sexual favors with Harvey Weinstein, or anyone, for advancement in my career,” Mol wrote. “I was never paid any settlement. The truth is that I have never been alone in a room with Harvey Weinstein … This is in no way a defense of this person, it is merely a statement of fact.”

Finally, Brian Koppelman, who along with David Levien wrote the screenplays for both Rounders and Runner Runner, took to Twitter to offer his own two cents on the situation: “Harvey Weinstein made my 1st movie. He also bullied and lied to me repeatedly. I didn’t realize until now that was the good treatment.”

According to multiple sources, after his wife of ten years and the mother of his two young children, Georgina Chapman, revealed her intention to leave him, Harvey Weinstein flew to Europe Tuesday night to attend a sex rehab program. He has made no public statements since.