The 2017 World Series of Poker is winding down, but the action is just beginning to heat up. A relaxed Qui Nguyen got off to an impressive start defending his World Series of Poker Main Event crown, Chris Ferguson and Phil Hellmuth went bracelet hunting, we’ll see winners Sunday in the Ladies event and $10K Stud, and Harrison Gimbel became the seventh player in history to claim poker’s coveted “triple crown,” and the second player to achieve such a feat at the 2017 WSOP. 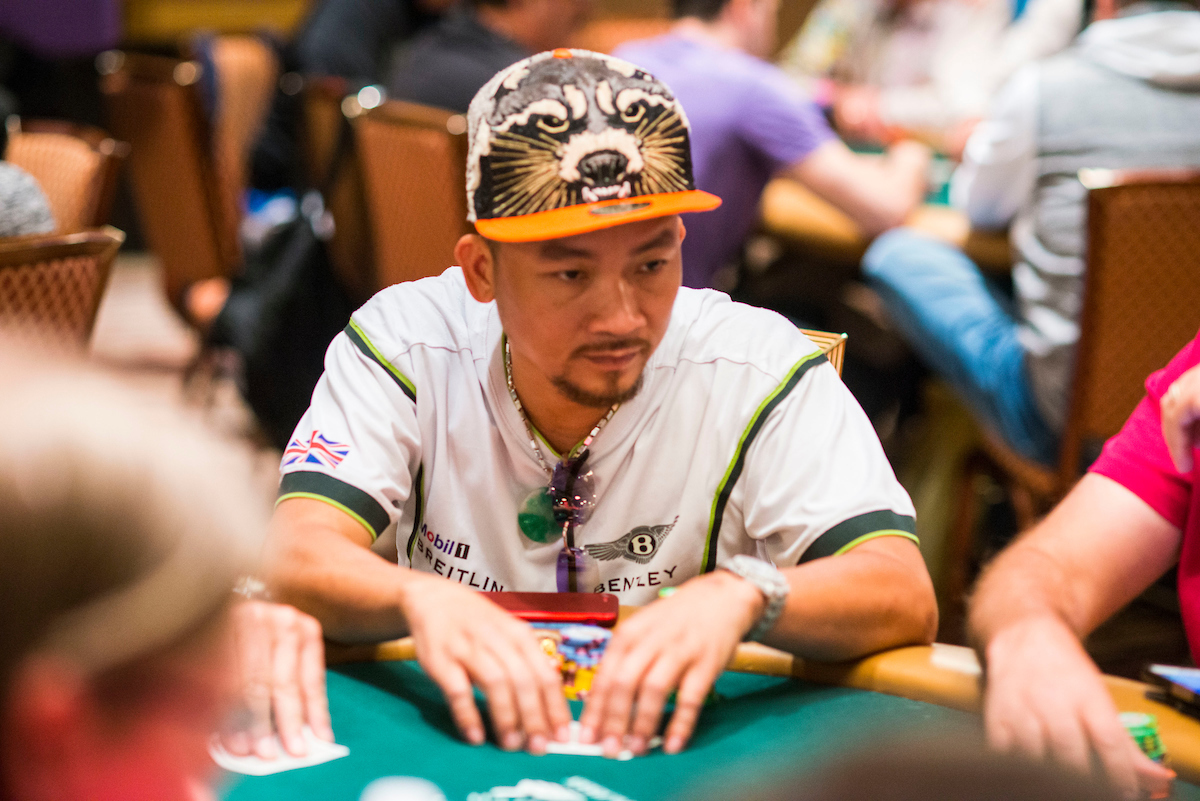 Day 1A of the Main Event, the first of three Day One starting flights, came and went on Saturday with 795 entries, the most for this flight since 2013. One of those entries was defending world champion Qui Nguyen.

The champ put on a strong performance on Day One, finishing the day with 96,700 chips. (Players began with 50,000.) Nguyen used the same tactics we saw at the final table last year, mixing in some three-bets pre-flop with marginal hands to isolate one player heads-up and using aggression to force opponents out of the pot.

Day 1B of the Main Event begins at 11 am. You can catch the action on ESPN2 and PokerGO “live” on a 30-minute gaming regulator-sanctioned delay.

At the end of the day, the Vietnamese-American poker player from Las Vegas said he felt more comfortable on Day One than in 2016. A year ago, he was just a random face among a large crowd. This year, he has a target on his back.

Nguyen was joined in the 1A flight by two other former champions, Martin Jacobson (2014) and Jerry Yang (2007). Yes, that’s right, it’s already been 10 years since Yang, an amateur, went on one of the sickest heaters in poker history to shock the world.

Yang has only eight WSOP cashes since 2007, none in the Main Event. And he won’t be adding another cash this year. He busted on Day One just before the session ended. He lost a big chunk of his stack earlier in the day on a bluff gone wrong. Memo to amateur players: it’s hard to get an opponent off top two-pair, especially when you’re a former champion.

Jacobson had a frustrating day but should be pleased with the conclusion. After dropping down to around 2,000 chips, he fought his way back and finished with 36,800. The Main Event is all about surviving and advancing. Building a massive stack on Day One is nice, but this is a 10-day event. It’s like a Major League Baseball team having the best record after the first week in a 162-game season.

Day 1: All About Surviving and Advancing

Most pros opt to play in the Day 1B and 1C flights, so 1A was short on entries and familiar faces. But there were some players you’ll probably recognize that have already advanced to Day Two.

Mike Matusow and Doug Polk ended up seated side-by-side at the same Day 1A table. The Mouth, hoping to make his third career Main Event final table, ended up with a healthy 94,000 chips. Polk, the One Drop High Roller champion, didn’t have quite as much luck, bagging less than he started with (42,700).

Richard Seymour, a former star NFL defensive lineman and Super Bowl champion, appeared on the ESPN and PokerGO feature table on Saturday. He was quiet for much of the day. At one point his stack dropped down to around 37,000, but he finished up strong (114,000).

Harrison Gimbel faced a tough opponent, Chance Kornuth, heads-up for the bracelet in Event #68, $3,000 No-Limit Hold’em, with $645,922 on the line. But just seven hands later, thanks in part to a pseudo-cooler hand, Gimbel would etch his name into the poker history books.

It wasn’t just for winning this tournament, but for becoming the seventh player in history, and second of this summer, to win a World Poker Tour, Pokerstars Championship Tour, and WSOP title. Gimbel burst onto the poker scene by winning the PCA Main Event for $2.2 million in 2010, and in 2016 took down a WPT Rolling Thunder event in Nebraska for $275k.

In the 2017 WSOP event, both players entered heads-up play nearly deadlocked at around 10 million chips. That’s when Kornuth picked up pocket 10’s only to run into Gimbel with pocket queens. The best hand held up and the tournament ended.

There wasn’t much Kornuth could have done to avoid the elimination. At a full table, a player won’t go broke with a big stack unless the hand is overplayed. But the value of that strong starting hand increases heads-up. So Kornuth can’t feel too bad going home with $399,132.

Baker and Hellmuth Come Up Short in Razz

If it seems like David “ODB” Baker is in contention for a WSOP title every week each summer, but, somehow, he has only one bracelet.

On Saturday, the man with 72 career WSOP cashes, had yet another opportunity to claim a second bracelet, his first since 2012, in Event #69, $1,500 Razz. But the poker gods still weren’t ready to shine down on Baker.

Phil Hellmuth also fell short in his quest to extend his WSOP record to 15 career bracelets. The Poker Brat entered the day with the smallest stack but nearly ran it up to the top. And then he quickly fell back down, busting in 6th place ($19,865), his record 127th cash.

No Lady Luck for Selbst

Remember what we said earlier about the value of bagging a big stack on Day One? Vanessa Selbst did just that in Event #70, $10,000 Ladies No-Limit Hold’em Championship. The most accomplished and arguably most skilled of current bad-ass lady players went out relatively early on Day Two, despite the chip advantage she held.

Julie Dang, in third position, has more than 70 cashes in smaller tournaments since 2006, including a final table appearance at this event in 2007. No matter where she finishes now, this will be the biggest tourney payday of her career, with the 5th place finisher guaranteed $29,256, and the champion taking home $135,098 and a gold bracelet.

Say what you will about Chris Ferguson’s character, but you simply can’t deny his poker acumen. After a strong performance in 2016 at the WSOP after a five-year hiatus, the man they call “Jesus” is a serious threat to win 2017 Player of the Year.

Ferguson will enter Day Three of Event #72, $10,000 Seven Card Stud Championship, second in chips with just seven players remaining. He’s shooting for his sixth career bracelet, valuable POY points (134.8 to the winner), and presumably to stick it to the haters.

The former Full Tilt Poker owner will start the final day with 853,000 chips and 733.46 POY points. A 1st or 2nd place finish would move him past current leader John Racener in the Player of the Year standings, assuming, of course, that Racener doesn’t somehow find a way to cash in five more tournaments between now and then.

John Monnette, also within POY striking distance, has 289,000 chips. He is one spot ahead of Ferguson on the POY leaderboard with 784 points.

But to win his sixth bracelet and send POY statisticians in a tizzy, Ferguson will have to rally to defeat a formidable opponent. Former Team Full Tilt pro and Omaha hi-lo bracelet winner Perry Friedman has held the chip lead (1,737,000) for much of this tournament.