The 2016 Master Classics of Poker (MCOP), which featured 25 tournaments over 15 days and was the 25th edition of the series, concluded this past weekend when Hakim Zoufri topped a field of 356 entrants to win the Main Event for $294,661. 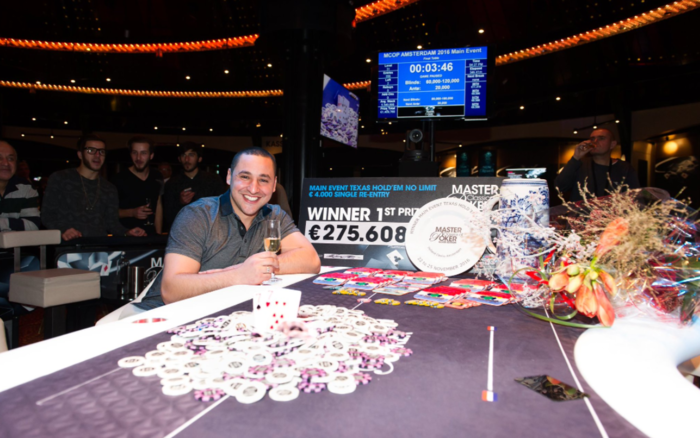 The Netherlands’ Hakim Zoufri poses with his spoils after winning the 2016 Master Classic of Poker Main Event for $294,661. (Image: Master Classics of Poker)

The “MCOP Silver Edition” took place at Holland Casino Amsterdam in the Netherlands,where it catered to 3,595 entries, and awarded more than €4 million ($4.26 million) in prize money throughout the festival.

The final table began with poker legend Juha Helppi leading the way, but some stiff competition saw him exit in fourth place for $98,421. After Ivan Arbatsky bowed out in third for $137,006, which vaulted him all the way to fourth on Kazakhstan’s all-time money list, Zoufri and Fabio Sperling engaged in an hour-long heads-up battle.

Unfortunately, the casino closed at 3 am, so the two were forced to come back for an impromptu Day 4 to finish it out. It took just 30 minutes for Zoufri to pull out for the lead and finish off his opponent.

With that, Zoufri added his name to the long list of MCOP winners that include Noah Boeken, Jusi Nevanlinna, and Robert Mizrachi, just to name a few.

What’s Next for Dutch Poker?