Gus Hansen is about to get back into the spotlight. The Great Dane will compete in the Celebrity Cash Kings cash game at King’s Casino in the Czech Republic on April 2. CashKings.TV will stream the action with commentary on a 30-minute delay. 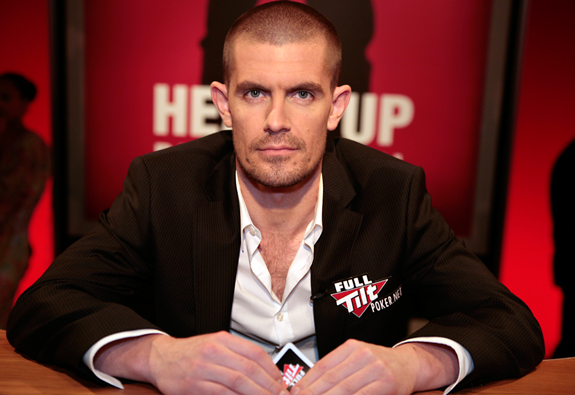 Gus Hansen will return to the televised high stakes cash game scene on April 2 in the Czech Republic. (Image: highstakesdb.com)

The high stakes cash game will last three days. On Sunday, the game will be No-Limit Texas Hold’em. The following two days, the players will test their skills at Pot-Limit Omaha.

Once a regular in televised poker shows, Hansen has been M.I.A. in recent years. The Great Dane, now 43, was a crowd favorite for his loose style of play and always friendly demeanor. When Gus was at the table, viewers knew there would be plenty of action.

Antanus “Tony G” Guoga was banned from entering Russia. He claims it is due to negative comments he made about the Russian government.

Sam Trickett, considered one of the best high stakes pros in the game, will join Hansen and Tony G in the cash game. As will Leon Tsourkernik, Jesper Hougaard, Theo Jorgensen, Ronny Kaiser, Jan-Peter Jachtmann, and Nikolaus Jedlicka.

Gus Hansen was the ultimate gambler a few years back. His poker resume includes losing more money online than any poker player ever, but has been one of the most successful live tournament players in history.

The Great Dane dropped nearly $21 million online, mostly at Full Tilt Poker. He was often spotted losing hundreds of thousands of dollars in a session to players such as Phil Ivey and Phil “OMGClayAiken” Galfond. But he kept coming back for more.

Many enjoyed watching Hansen play online. He regularly called off big bets with marginal hands and never found a drawing hand he didn’t like. Gus threw money around like it was nothing. Hence, why no one has ever come close to reaching his net-loss record online.

But there’s another side to Gus’s poker story. He owns a World Series of Poker bracelet, is tied for the most World Poker Tour wins (3), an Aussie Millions Main Event title, and has more than $10 million in live tournament winnings.

Hansen’s biggest score came in the $25,000 WPT Five Diamond for 2nd place ($1,714,800). David Chiu beat him heads-up. Had Gus won, it would have been his fourth career WPT title, a record that would stand to this day.

A brilliant mind in the live games, crushed for $21 million in rigged online poker. Rigged is my personal opinion, there are many “extremely skilled” poker players who win live and online for whatever reasons.

Thanks again for letting us know your ridiculous assumptions as to why Gus Hansen is the biggest losing online cash game player. Of course it could have nothing to do with the guy having a massive TILT problem & it could never have anything to do with the possibility of him falling behind ‘skillwise’ vs. the current top HighStakes cashgame players today. Nope! … that can’t be it.

Please tell us some more pearls of wisdom.