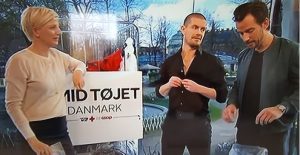 Gus Hansen (center), along with the hosts of Good Morning Denmark. (Image: Highstakesdb.com)

Gus Hansen is one of the names that pop up when poker fans reminisce about the poker boom era days. The Great Dane, now 42 years old (where has time gone?), has been M.I.A around the high stakes poker world for quite some time.

But he recently popped up on Good Morning Denmark to share with the people of his home land what he’s been up to. Gus said he is no longer playing high stakes poker games and is staying in Denmark “for good.”

Hansen has moved around the world throughout his adult life but appears dead set on making his native country a permanent residence.

He appeared on the show for charitable reasons. Always known as a generous man, Hansen took part in a Red Cross campaign along with other local celebrities. Gus donated a Full Tilt Poker shirt. He is a former FTP pro.

Gus didn’t say he has given up poker completely, but he clearly understands the high stakes levels aren’t for him at this time.

Perhaps Gus should have discovered the high stakes games weren’t for him years ago. The Great Dane is also The Great Donk according to many online poker players.

He was given that nickname for being the all-time biggest online poker loser, and it’s not even close. Hansen’s Full Tilt account lost over $20 million. No other screen name has lost more than $7 million lifetime.

Why any player would continue playing for so long while losing so much is a mystery to many. But Hansen admitted in the past he had poor game selection and struggled to avoid going on tilt.

During the poker boom era when Full Tilt was a major online poker brand, many poker players enjoyed watching Gus play in high stakes cash games. He often would have major swings due to his loose style of play. That made him an entertaining watch.

He Really Wasn’t a Donk

Hansen often gets criticized for his big losses online, but he proved offline he can compete against the world’s best in the biggest tournaments. Gus has over $10 million in lifetime live tournament winnings, good for 38th all-time.

Sure, that’s only about half the amount he’s dropped online, but it’s still an impressive feat. Hansen’s live tournament resume includes a World Series of Poker gold bracelet, three World Poker Tour titles, and a victory at the 2007 Aussie Millions Championship.

However, he isn’t Denmark’s all-time biggest live tournament winner. That title goes to 2008 WSOP champ Peter Eastgate. He has just over $11 million in career winnings.

I love Gus. Just an all around great guy.