With dozens of tournaments running daily over the summer in Las Vegas, poker players have tough decisions about where to play. 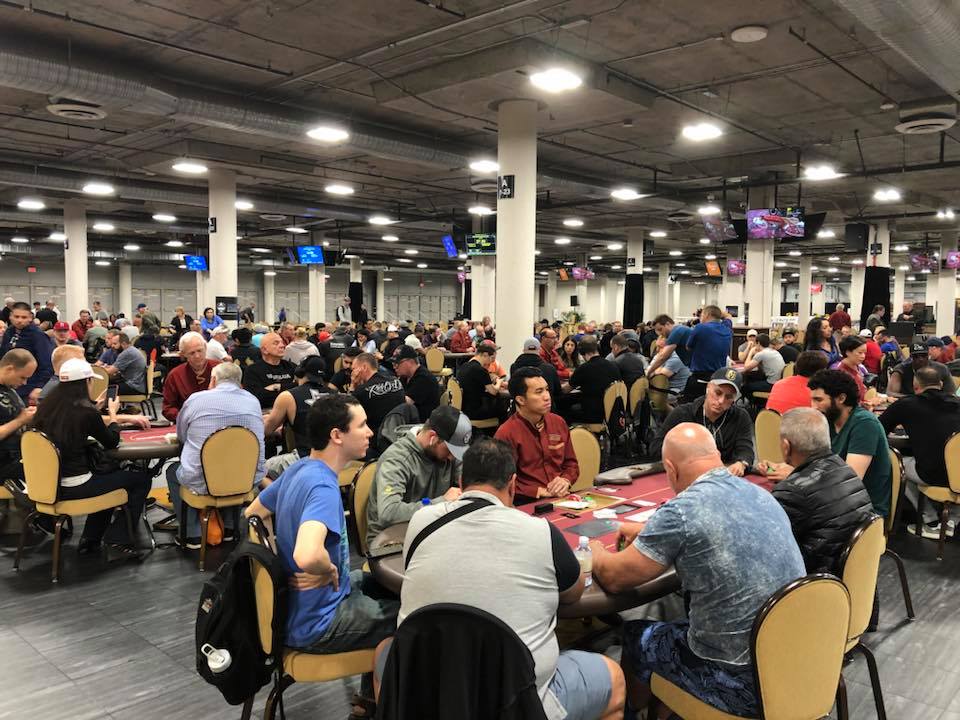 Many poker players chose the $3.5 million guaranteed Mid-States Poker Tour event at the Venetian over the WSOP Colossus for its ‘value.’ (Image: CardsChat)

On Sunday, 2008 WSOP Player of the Year Erick Lindgren chose the “value” of the $3.5 million guaranteed Mid-States Poker Tour event at the Venetian over the turbo-style Colossus at the World Series of Poker.

“The $3.5 million guaranteed prize pool is a big draw, especially for an $1,100 buy-in,” Lindgren told CardsChat. “It’s hard to beat that value, especially with a decent structure for a $1K.”

Poker boom era fans might remember Lindgren as a former Full Tilt Poker pro who won two WSOP bracelets and was once considered one of the best players in the game, up there with the Phil Ivey’s of the world.

But as many poker stars do, “E-Dog” fell on hard times financially, due to an admitted gambling problem  (sports betting) and no longer competes in the highest stakes games. But his poker career is far from over.

In April, Lindgren finished 2nd for $181,864 in the WSOP Circuit Main Event at Harrah’s Cherokee in North Carolina, his first six-figure score since a 7th place finish in the WSOP Millionaire Maker event in 2015.

He also wasn’t wasn’t the only well-known poker personality to chose the Venetian over the Rio as their poker destination on Sunday. Joining Lindgren as Day 1A bustouts were “Poker Night in America” villain Mike Dentale and 2015 WSOP Main Event runner-up Josh Beckley.

The Mid-States Poker Tour hosts regional poker tournaments around the country throughout the year in cities such as Milwaukee, Sioux Falls (South Dakota), Shakopee (Minnesota), and Evansville (Indiana). Each stop guarantees a six- or seven-figure prize pool, with competitors incentivized to rack up points toward being crowned Player of the Year.

Current MSPT POY leader Aaron Johnson — who also happens to be leading the Heartland Poker Tour’s POY race — explained why he opted to compete in Sunday’s MSPT event over the WSOP’s Colossus, a massive-field tournament going on at the same time.

“Although great value, the WSOP Colossus is a very turbo-y tournament and incredibly difficult to bag (chips),” Johnson said. “The $1,100 MSPT Venetian is one of the best tournaments of the summer and the new setup at Venetian is awesome. If one is having difficulty bagging the Colossus, I’d highly recommend checking it out over here.”

MSPT Season 8 Player of the Year Chris Myers echoed Johnson’s statement and said the “influx of WSOP players” attracted him to the non-WSOP event at the Venetian’s Sands Expo Convention Center.

Myers prefers the “well-structured” MSPT tournament over an event such as the $565 buy-in Colossus that some consider a crapshoot.

MSPT Media Director Chad Holloway told CardsChat he predicts “about 4,200” Day One entries spread out over four starting flights, a far cry from the Colossus, which could hit 20,000 entries. If his prediction comes to fruition, the tournament will easily surpass its $3.5 million guarantee.

The MSPT isn’t the only tournament offering great value to its players in Las Vegas this week. Planet Hollywood and Wynn are among the local casinos hosting events that might be of interest to those who bust out of the MSPT.

The highest honor in poker is winning a WSOP gold bracelet. But players who are more interested in “value” often choose summer events outside the Rio.

The $250 1pm daily deepstack at Rio are also good value. Other hotels advertise 100k gtd but this tourney surpasses that easily every day. Why pay $550 at Wynn for a 100k gtd? Or pay $200 for 40k in a day at Planet Hollywood

I’m debating what tourneys to do over the next few days. Thanks for this article.

Hm. Obviously if the structure is not turbo and you get 3.5$ mill prize pool there it’s a good choise, with smaller field and especially better in compare with “Upcoming value-friendly tournaments in Las Vegas”. Just in my vision.