Griffin Benger, who last year finished seventh in the World Series of Poker Main Event, came out on top of a 1,129-entry field to win the €1,150 buy-in 2017 Irish Poker Open for €200,000 ($213,260). The longest-running no-limit hold’em poker tournament in Europe, the three-day event, which was held at the Citywest Hotel in Dublin, was part of a poker festival that combined the Irish Poker Open and the Norwegian Masters. 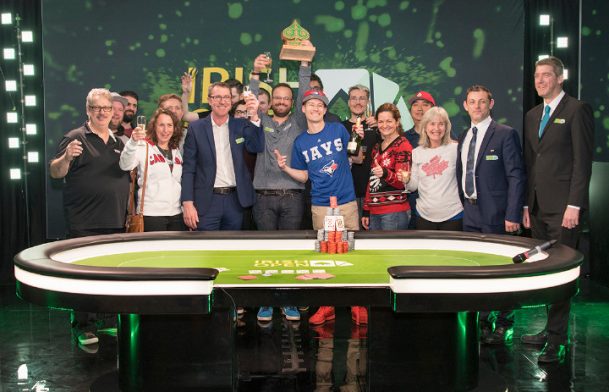 With the win, Benger now has $3.9 million in live tournament earnings, not to mention the more than $5 million he’s won playing online under the moniker “Flush_Entity.” In 2014, he also rose to the top of online poker’s world rankings.

The former professional Counterstrike gamer and commentator for the Global Poker League, Benger made headlines last year when he final tabled the WSOP Main Event. He ultimately finished in seventh place for a career-high $1,250,190. He also won $1 million for taking down Shark Care Season 1, and $562,343 for winning the EPT9 Berlin High Roller. Those are his only three cashes bigger than his Irish Poker Open prize.

According to updates from the event, Mihal Mazilu began heads-up play with the chip lead, but just a few hands in Benger doubled into it when he flopped a seven-high straight against his opponent’s pocket eights.

Not long after that, in what would be the final hand of the tournament, the flop came down 8♥2♥6♣ and Benger checked. Mazilu, who held the 10♣8♠ on the button, then put out a bet and snap-called off after Benger, who was sitting with the K♥8♦ check-raised all in.

Both players had flopped top pair, but Benger’s kicker had him well out in front. The 9♦ turn gave Mazilu a gutshot, but he missed it as the 2♠ bricked on the river. With that, Benger became etched his name in the Irish Poker Open history books.

“Incredibly humbled and grateful to win the oldest tournament in Europe, home to so many close friends,” Benger said on social media after the win. “Thanks for all the support, it means the world.”

Established in 1980 by the late Irish bookmaker Terry Rogers, the Irish Poker Open is Europe’s longest-running poker tournament. After visiting Las Vegas, Rogers had the idea of not only establishing a top-notch poker tournament in Ireland, but to also attract the biggest names in the game. It took some convincing, but he managed to get early superstars in the game such as Doyle Brunson, Chip Reese, and even Stu Ungar to travel across the pond.

“I have been the greatest single factor in the worldwide spread of competitive poker,” Rogers once told CardPlayer Europe.

This year, thanks to a lower buy-in, 1,129 entrants took to the felt to make it the largest ever Irish Poker Open by attendance. As a result, the €1 million guarantee was surpassed by creating a €1,128,294 prize pool that was distributed to the top 135 players.