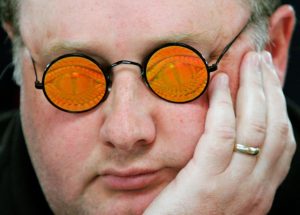 Greg Raymer is seeking backers for his 2016 poker play on YouStake, a crowdfunding site for athletes and poker players.

The 2004 World Series of Poker Main Event champion, in his YouStake post, stated not having any guaranteed income as his reason for looking to be staked.

“FossilMan,” Raymer’s Internet poker moniker, won $5 million for his Main Event title and has more than $7 million in lifetime live poker tournament earnings, which might make some people go “huh?” to his cries of uncertain incoming cash.

But then again, a gambler’s life is full of highs and lows and more swings than a playground at Mall of America.

While it’s unclear if Raymer is short on cash these days, he made it clear that his wife played a role in his decision to seek backers.

“Since I no longer have a guaranteed source of income, my wife has become more nervous about poker,” Raymer said in his crowdfunding plea.

He also mentioned an issue that makes it difficult for many professional poker players to hold long-term relationships together.

“Although I have a 23-year track record of winning results in both tournaments and cash games, (my wife) is not a poker player, and is worried that I will start losing.”

YouStake allows poker players to sell off action to investors. Raymer is selling pieces of his action for $105 to $5,250, depending on how much the investor can afford.

One full share costs $1,050 to buy-in. Backers receive a portion of his 2016 profits, based on the amount they chipped in, of course.

Raymer said he will manage his bankroll “sensibly” throughout the year, but doesn’t have any exact rules for deciding which poker tournaments to enter, other than that he won’t play high buy-in tournaments “if the bankroll is not large enough to justify doing so.”

Of course, the former world champ will be using $10,000 of that money to chase his second Main Event gold bracelet come the 2016 World Series of Poker in Las Vegas.

Despite having $7.5 million in lifetime live tournament winnings, it’s been quite some time since FossilMan pulled off a big score. It was in 2012, to be exact, when he won three Heartland Poker Tour titles within a two-month period.

Track record is everything when it comes to investors making a decision whether or not to back a poker player. Raymer’s recent results likely won’t excite many investors, but his past results just might.

I am very curious to see how he uses bankroll management with this. He has done something similar the past two years I believe, at least I was reading that somewhere online. Only time will tell, good luck Greg.

In these days I have reviewed many WSOP tournaments and it amazes me how different they are from each other in the sense of the players different strategies used and the difficulties encountered at present is on another level , the difference between the final table between 2004 and 2015 are incredibly spread, not to mention the show, there is a big difference between being a player of strategy to be a gambler , player strategy measures and gambling is one of ontn arriving with great luck to a final table , I see them every day for PokerStars, Greg Raymer is a gambler and always based his game that’s a player aLL iN pre flo, and if we see their numbers and how he won the WSOP 2004 tube sedated that lots and lots of luck and did a strategy game , so the idea of banquear their participation in a tournament is a complete media frenzy and it will have a safe baqueen loss craze .