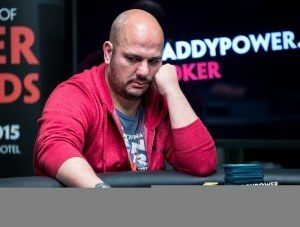 After four days of action, this year’s Irish Poker Open finally reached a conclusion today and the man toasting a pint of Guinness after the event was Greek grinder, Ioannis Triantafyllakis.

At the start of Monday’s final session it was local legend, Donnacha O’Dea leading the way with just over two million chips.

Having made his way past more than 300 players over the Easter weekend in the €3,500 ($3,843) Main Event, O’Dea found himself leading the likes of Declan Connolly (playing in his third Irish Poker Open final) and recent UKIPT champion, Kevin Killeen.

However, despite building up a sizeable lead in the run-up to the finale, O’Dea was unable to parlay his luck into a winning run.

Although he was able to evade some of the early advances from the short stacks, O’Dea ultimately fell in fifth place; but not before he was the victim of an epic slowroll against Andreas Gann.

Justice from the Poker Gods

Following an uncharacteristic raise from early position by O’Dea, a short stacked Gann pondered his options with Kd Qd.

Despite having a stack just the right size to raise all-in, Gann decided to make the call and struck lucky when the flop ran out: 6d Ad 8d.

Checking the nut flush to O’Dea (who had two pair with Ac 6c), Gann then took an inordinate amount of time to call after his opponent put him all-in.

When the German pro tabled his cards the table sat in shock as the commentators called for an ace or six to help O’Dea.

As the rest of the table vocalized their complaints, O’Dea sat silent and watched as the dealer delivered the 7c on the turn before serving up some justice on the river with the 6h.

As the crowd erupted and O’Dea cracked a subtle smile, a dejected Gann got up from his seat and made his way to the rail in eighth place.

Following Gann’s exit a string of international players, including O’Dea, made their way to the cashiers’ desk until only Kevin Killeen and Ioannis Triantafyllakis remained.

After dividing up the prizepool, the pair battled back-and-forth for more than an hour before Triantafyllakis secured the win.

Having entered the final showdown with the lead, the Greek grinder, who’d only won $3,821 prior to the event, managed to keep his composure and lock up the win.

The Greek player managed to qualify online via the Irish site and that meant he was eligible for the Sole Survivor bonus.