Steffen Sontheimer was an unstoppable force at the inaugural Poker Masters, making every final table, cashing in four events, and winning two of them, including the $100,000 buy-in series finale. The man called “Goose” ran away with the Purple Jacket, awarded to the winningest player of the series, by tallying up more than $2.7 million in tournament payouts. 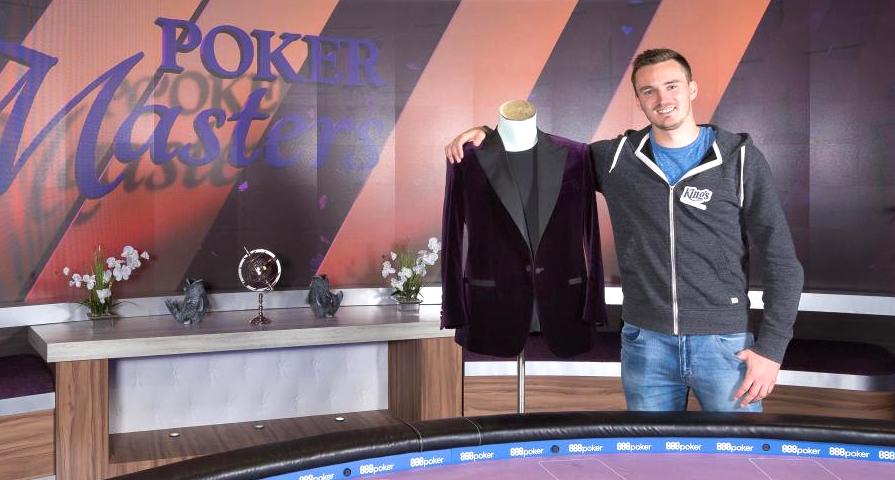 Steffen Sontheimer is ready to hit the town with his new Purple Jacket and more than $2.7 million won at the 2017 Poker Masters. (Image: Poker Central)

Four Germans and two Americans returned to the Aria in Las Vegas on Wednesday to play for a share of the $3.6 million prize pool, and a $1.5 million first prize. It was a bit of a strange, but typical day of poker.

Play lasted for more than five hours before the first player busted. After Stefan Schillhabel stepped away from the table in sixth place ($180,000), players began to fall one after the other.

One the hand immediately following Schillhabel’s bustout, Justin Bonomo and his bright pink hair were sent to the rails in fifth place ($216,000). Then on the next hand, it was Seth Davies’ turn to exit ($324,000). That made for an all-German final three, with Fedor Holz and Christian Christner joining Sontheimer to fight to the death. Okay, maybe not quite, but there was a $1 million difference between first and third.

Christner was a massive chip leader at this point, but with Sontheimer still alive, he was eliminated from Purple Jacket contention. Holz still could take home the ultimate prize, but only if Sontheimer was the first to be eliminated from the final three.

Any such Purple Jacket dreams for Holz quickly evaporated when he lost a pre-flop all-in race to Christner and finished in 3rd place ($504,000). It was Holz’s second top-three finish of the series, and put his lifetime live tournament cashes at more than $24 million. Not too shabby for a 24-year-old.

That was enough for Sontheimer to lock up the Purple Jacket. But he still had some business to take care of. The difference between 1st and 2nd place was nearly $650,000, and he had a 2-1 chip disadvantage.

Five hands into heads-up play, Christner had extended his lead. And then the tides turned. The Goose won a couple of pots, then doubled-up to flip the script and take control of nearly twice as many chips as his opponent.

From there, Sontheimer went on a sick heater that included rivering quads, flopping two-pair, rivering a three-outer, and flopping the nut straight. All solid hands for heads-up play, and they all came in the span of 30 minutes. How was this not yet over?

At one point, Goose had 6.7 million chips against Christner’s 405,000. But poker is a funny game. Christner couldn’t seem to win any pot, except for his all-ins.

The two went back and forth. Sontheimer would win a few pots to extend his lead, then Christner would find a hand to push, and he’d double-up. Rinse and repeat, four times. After the fourth double-up, Goose’s chip advantage was back down to 2-1.

Would this match ever end? Yes. On the 41st hand of heads-up play, Sontheimer got it all-in with pocket queens against deuces pre-flop. And, get this, he finally won an all-in to end the tournament. Christner, for his impressive run, walked away with enough to buy a new home in Brighton, England, where he resides ($864,000).

Sontheimer’s winning the final event of the Poker Masters series seemed a fitting way to wrap it up. It was his second Masters victory, the first coming in Event #2 for $900,000. He finished the series with $2,733,000 from his four cashes. Plus an extra $50,000 for his sidebet with Daniel Negreanu.

The marvelous performance by the young German came as no surprise to Holz. Last week, he referred to Goose as the “best player in the game today,” which is high praise coming from one of the most successful high-stakes pros of all-time.

Sontheimer ran away with the Purple Jacket. Bryn Kenney, the 2017 GPI Player of the Year leader and Event #3 champion, was his closest competitor with “just” $1,085,000.

That wraps up the inaugural Poker Masters high-roller series. Thanks to skill and the cards falling his way, Steffen Sontheimer was the biggest winner. He tweeted after the victory:

@RunGo0seRun: That week was just overwhelming, superhappy with my play. Rungood was unreal

Congrats to the champ. His name is one poker aficionados won’t forget, even when he’s not wearing his well-deserved Purple Jacket.