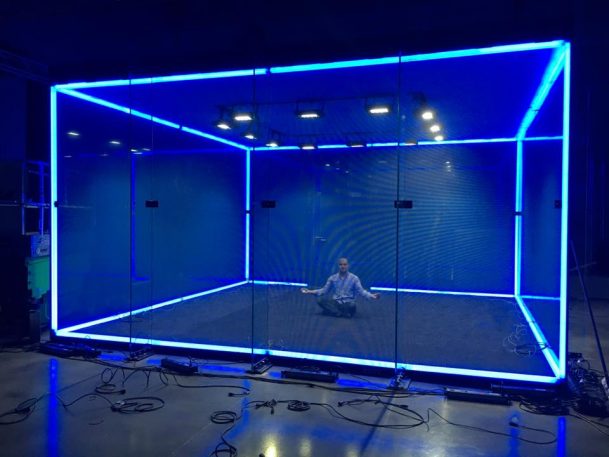 The Global Poker League (GPL) “Cube” has now made its debut in Las Vegas just two months after the competition officially got underway.

Innovator and GPL founder and CEO Alex Dreyfus first outlined the concept for The Cube back in October 2015, when the league itself was still just a concept. Fast forward a few months later, and poker’s first-ever 20-ton glass arena has been brought to life in Las Vegas.

Complete with a trademark, The Cube will play host to the GPL’s Summer Series, a six-week long chain of cross-conference matches, but it’s unlike any poker stage that’s gone before it, according to Dreyfus.

Taking inspiration from the famous UFC Octagon, The Cube will see players compete standing up inside a box where the audience can see in, but they can’t see out of.

The reason for this dynamic is so that the audience can see a live stream of playing stats and player information, as well as the live action, during each match. Essentially, what The Cube will do is create a more interactive spectacle that fuses online information with live performances.

“The GPL aims to innovate, disrupt and experiment to create narratives and fan experiences that are much more than what cards a player holds,” reads the press release from the GPL.

Visually, the 20 x 20-foot structure is impressive, but this is just the tip of the glass iceberg, according to Dreyfus.

Without wanting to stray into “reality TV” territory, he wants The Cube to become a complete multimedia stage that enhances the drama of poker and makes it much more like a sport than ever before.

To help achieve the aim of “sportifying” poker, The Cube will undergo a number of enhancements over the next few months, including:

For now, however, The Cube will see teams in the Summer Series compete in a variety of quick fire matches lasting between 30 and 40 minutes.

By using real chips and digital cards (containing RFID chips), matches inside The Cube will not only bridge the gap between live and online poker, but make the spectacle more intense and, hopefully, more entertaining. The first GPL Summer Series events kick off today with the LA Sunset vs. the Paris Aviators matchup and, to give the opening event some added sparkle, Breaking Bad star Aaron Paul will be playing.

After he was drafted by LA Sunset team manager Maria Ho, Paul has been honing his skills and will make his debut inside The Cube.

To watch the Summer Series live throughout the week, check out the GPL’s official website.