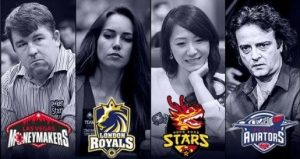 Global Poker League releases the news of its 12 franchises and their superstar managers. (Image: CardPlayer/GPL)

The Global Poker League (GPL), the novel poker tournament concept from Alex Dreyfus, now has 12 franchises ready to play in series of televised live and online events, preceded by a live draft which will kick off in mid-February.

Following the recent announcement that Chris Moneymaker would be leading the Las Vegas Moneymakers team into battle, the GPL has now released the names of all 12 teams set to compete in the poker challenge.

Poker Talent from Around the World

Hailing from the four corners of the globe, the franchises will compete in a series of tournaments that Dreyfus claims will revolutionize the way poker is presented to the masses.

Thanks to innovations such as “the cube” (a multimedia stage on which GPL events will be held), Dreyfus hopes to persuade the general public that poker is as much of a sport as football or soccer.

In line with this idea, Dreyfus has used the concept of franchises similar to the ones found in US sports leagues, such as Major League Soccer. Under the system common in the sporting world, a franchise is a team made up of drafted players and backed by an individual or a company.

For his Global Poker League, Dreyfus has taken this model and appointed 12 recognized and popular players to act as managers of each franchise. Although the players aren’t required to invest any money into the system (or the tournaments), there will be prize money available for successful franchises, thanks to a network of sponsors.

Live Draft to Be Streamed on Twitch

As MLS and NFL teams do, the GPL franchises will be made up of players chosen by each manager in a special drafting ceremony at the SLS Hotel in Beverly Hills.

Set to take place on February 15 at 2 pm PST, the live event will streamed via Twitch. Hosting the event will be the effervescent Kara Scott and a host of poker experts, such as Phil Hellmuth.

Any players ranked on the Global Poker Index (GPI) are eligible for the draft. A number of notable pros, including Chris Moorman, Darren Elias, and Anthony Zinno, have already confirmed their interest.

Once the draft is complete, the franchises will compete in a league format over a number of weeks and, when the season is over, the top-ranked teams will playoff to determine the inaugural GPL champion.

“Today is an exciting day in Global Poker League history, the confirmation of our team managers is a crucial step towards our goal,” said Dreyfus.

So who exactly are the 12 franchises and managers set to compete in the inaugural season of the Global Poker League?