GGPoker is giving its players an opportunity to send angry videos to opponents after suffering a bad beat. Well, that isn’t technically the purpose of the poker site’s new SnapCam feature, but you can expect many an upset player to use it for that reason. 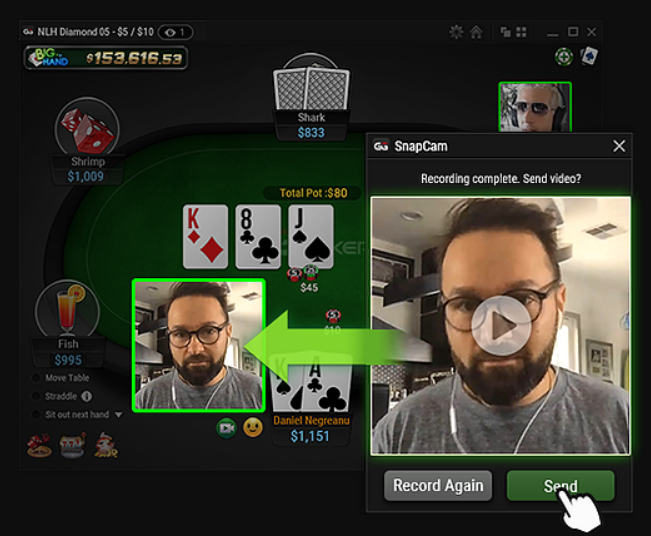 GGPoker is taking a risk with its new SnapCam feature. (Image: GGPoker.com)

The new feature is now available, but only for PC users, and isn’t available yet for mobile app and Mac users. The growing poker site anticipates rolling out a Mac version in the coming weeks. SnapCam is essentially a revolutionary way for online poker players to communicate with each other.

Since the beginning of the century when internet poker first launched, communication between players has been limited to a generic text chat box. Players often send short messages such as “gg” (good game), “nh” (nice hand), “gl” (good luck), or after some fish sucks out on the river with 7-2, “u r the biggest donkey ever, i hope u end up homeless and starve to death.”

But now, at least on GGPoker, players have more creative ways to insult their opponents. Or, better yet, congratulate them for winning a hand.

SnapCam — Fad or the Future?

SnapCam allows four players at a time to send 15-minute videos during play, and everyone at the table can view them. If more than four players attempt to send videos at the same time, they will be held in a queue and revealed a few seconds later.

If you don’t want to see your opponent’s reaction to you hitting a gut-shot on the river, you can mute the feature. You can even block certain players — or everyone — it’s your choice. GGPoker, per its terms and conditions, won’t tolerate abusive behavior via SnapCam.

“The broadcast of offensive content, such as racist or sexist content or images, is not permitted, nor can players use SnapCam to harass others,” the poker site wrote.

Much like traditional online poker chat, GGPoker can ban the SnapCam feature from those who abuse the privilege. Players who feel they’ve been harassed or witnessed abusive and racist content can email help@ggpoker.com to complain.

Each player has a SnapCam button next to their avatar. To create a video (15-second maximum), simply click that button and start recording. The new feature is currently available in all cash games and tournaments, including the gimmicky GGPoker games such as All-In or Fold and Spin & Gold.