Natural8, a GGPoker Network poker site, recently played host to a pot big enough to buy the winner a mini-mansion while leaving the losing player down a decade’s worth of income for the average American. 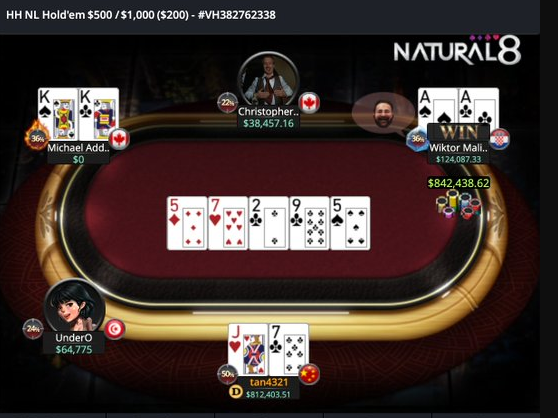 The pot was fought over between two high-stakes grinders, both winning online players. Wiktor Malinowski, known in the online poker streets as the feared “limitless,” and Michael Addamo both took a seat in a private VIP high-roller game. With the blinds at $500/$1,000 and a $1,000 ante, the pots in the game were consistently large. But one hand was larger than any other.

The flop came out 5-7-2 rainbow, no improvement or help for either player. Addamo continued his aggression, knowing he was unlikely beat by anything other than aces, and bet $71,775 — about one-third the size of the pot. With no reason to fear aces being beat on a dry flop, Malinowski made the call.

The 9 on the turn brought a flush draw but the board still wasn’t scary for either player. Addamo once again bet, this time for $100,146.50, and was again called. When the 5 on the river hit, pairing the board, but missing the backdoor flush draw, Addamo attempted to get one final street of value with his kings, and moved all-in for $140,547.80. He quickly learned the bad news when “limitless” snap-called, taking down a pot of $842,438.62, the largest recorded No-Limit Hold’em pot in online poker history.

A Hand for History

Addamo lost more than $400,000 in one hand, more than anyone’s ever lost in a single No-Limit Hold’em hand on the internet. But it wasn’t the largest pot in online poker history, regardless of game. Not even close.

During the poker boom era, Patrik Antonius and Viktor “Isildur1” Blom squared off in a number of six-figure Pot-Limit Omaha hands in the Full Tilt Poker nosebleed games. In one 2009 hand, they played a pot that was massive even by their lofty standards.

With $1,356,946.50 in the middle, an online poker record, the 5h landed on the turn, leaving Blom drawing dead to a non-heart 3 or 7 (four outs). The 9c fell on the river, giving Antonius the biggest internet poker pot ever. That record still holds up to this day.