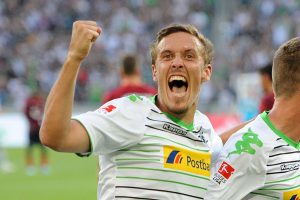 Max Kruze, who was fined by Worlfsburg after a rather careless taxi ride home from the WSOPE in Berlin last year. (Image: thehardtackle.com)

Max Kruse, the star striker for German soccer team Wolfsburg and apparent poker enthusiast, has been delivered a cruel double bad beat, according to the German Press this week.

We say cruel, but we imagine he can afford it.

Having scored a hat-trick for his team in its demolition of Hoffenheim last October, the 27-year-old headed to the World Series of Poker Europe in Berlin the next day, where his good form continued.

German newspaper Bild reports that he won money in a tournament there, although (sticklers that we are), we should point out that there is no record of this. Kruse has cashed in the tournaments at the WSOP in Vegas but never in the European iteration.

It seems likely, then, that our hero won some money playing in a high stakes cash games at the festival; $83,000, according to the newspaper, which he promptly left in the back of his cab.

Horrified, Kruse called the police. After all, this amounted to almost a WHOLE WEEK’S WAGES, for the soccer player, who earns around $96,000 per week for his services to Wolfsburg.

Police were unable to retrieve the player’s wad, but the investigation alerted Wolfsburg management to his plight, and they took a dim view, fining him an extra $30,000 for reckless behavior and warning him on his future conduct.

“You might be a private person as a footballer when you are in your bed,” read an official Wolfsburg statement. “At any other point, you are also an employee of the club. We have explained to him what sort of behavior we expect from our players. We can only hope that he has been taught a lesson and will change his behavior.”

Kruse is not the first high-profile soccer player to find himself in hot water after a night at the poker tables and we suspect he may not be the last.

Former Liverpool player Albert Riera was recently forced to deny that he was sacked by Italian Serie A club Udinese for playing truant in order to attend a poker tournament in Slovenia.

The UK’s Daily Mirror alleged that while the rest of his team were engaged in a hard-fought battle against Chievo Verona in November 2014, Riera was busy collecting $4,700 for finishing second in the $270 + 30 DSP Rewind Main Event in Ljubljana.

We all know that Spanish wingers like to take a good flop, but according to Riera, the termination of the contract was “by mutual agreement” and “not due reasons outside football.”

Riera once tweeted that Unidese was “the worst club I’ve ever played for,” and he’s played for a few…

lol he called police becouse of a 80k $,and he earn that in one week…how could you forget 80k? lol

As DiCaprio lost his Oscar.