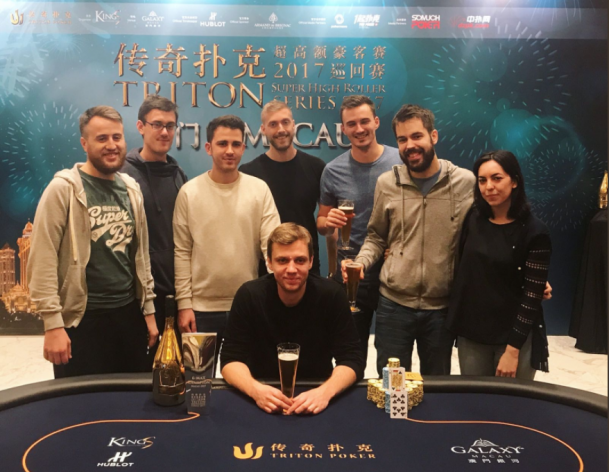 The win marked the third-largest score for Stefan Schillhabel, who now resides in Vienna, Austria, and brought his lifetime earnings up past $6.5 million. In May, he placed third in the $300,000 Super High Roller Bowl at the Aria in Las Vegas for $2.4 million, and in March 2016 he really made a name for himself by winning the World Poker Tour Bay 101 Shooting Star main event for $1.3 million.

Among those to play this event in China were recently-married Ben Lamb, Winamax’s Adrian Mateos and Mustapha Kanit, and Poker Masters champ Steffen Sontheimer. Unfortunately for all of them, none managed to make the money by finishing in the top 12.

Manig Loeser, who in July won the Triton Super High Roller Series Montenegro, made it to three-handed play and collided with Schillhabel in Level 25 (25k/50k/5k), when Schillhabel raised to 100,000 and then called Loeser’s three-bet shoved for roughly 750,000.

Loeser held the K♥J♦ but was way behind the K♦Q♣ of Schillhabel. The board ran out A♥9♣5♥3♣8♠ and Loeser was denied his second Triton title, an honor held only by Fedor Holz.

It was a flip, but not after a 7♣A♥J♥ flop paired Schillhabel. Neither a 3♥ on the turn nor a 8♣ on the river helped Watson, and he had to settle for second place and a $550,399 consolation prize. It marked the fifth-largest score of his career and brought his lifetime earnings up to $10,658,564.