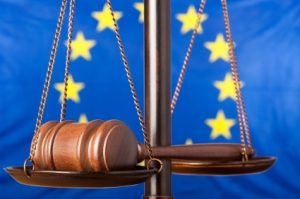 Europe’s highest court has been asked to consider the legality of the new online gambling regime, and that could be good news for poker players. (Image: eutopialaw.com)

The UK point of consumption tax, which has had a trickle down effect on the country’s online poker players, forcing up rakes and curtailing VIP schemes, is about to be challenged in Europe’s highest court.

The Gibraltar Betting and Gaming Association (GBGA), which has long railed against the new UK licensing regime, received a boost to its ongoing legal crusade against the British government’s betting laws this week.

The High Court of England and Wales referred the case to the European Court of Justice, asking it to consider the legality of the point of consumption tax as a matter of “constitutional importance.”

The tax regime was established at the beginning of this year, following the implementation of the UK Gambling Act.

It requires operators with exposure to the UK market to be licensed and regulated within the UK, and to pay a 15 percent levy on gross gaming revenues.

Under the regulations of the previous regime, operators were licensed and taxed by a series of jurisdictions that had been “whitelisted” by the UK government, of which Gibraltar was one.

These jurisdictions, while meeting strict standards of regulation, were essentially tax havens for online gaming companies, from where they were free to engage with one of the most developed gambling markets in the world.

Some operators chose to quit the UK market in the wake of the new laws, but most stayed.

Now taxed more heavily, they had to increase their margins, and the players would feel the pinch in terms of fewer bonuses, squeezed VIP schemes and, in some cases, higher rake.

GBGC immediately took up the cause. Its argument is that the new rules contravene Article 56 of the Treaty on the Functioning of the European Union (TFEU), which deals with the right to trade freely across borders.

Under EU law, member states are permitted to impose restrictions on cross-border services only if they can provide ample justification that their motives are to protect the vulnerable or to prevent crime.

This was indeed the justification for the UK gambling reforms.

But, as GBGA has pointed out, a highly taxed market pushes players towards the unlicensed markets, who, unburdened by heavy taxes, are able to offer better bonuses and more competitive rake, but no guarantee of player protection.

Furthermore, says the GBGA, the previous system, implemented by the previous gambling act of 2005, was working.

Since problem gambling figures had actually fallen in the UK between 2005 and 2014, there can be little justification for reform, and this would render the new regulation illegal under EU law.

These are the points of contention that the European Court of Justice has been asked to consider.

“Because of this sensible decision we now look forward to European judges considering this matter and believe they will confirm our position,” said GBGA today.

surprisingly , I side with the Gilbraltar Betting and Gaming Association on this issue . we shall see how the European Court of Justice decides .