Phil Galfond needs one of the great comebacks in poker history in order to salvage something from his heads-up battle with “VeniVidi1993,” who now leads by nearly €570,000 ($627,000) in the first battle of the Galfond Challenge. 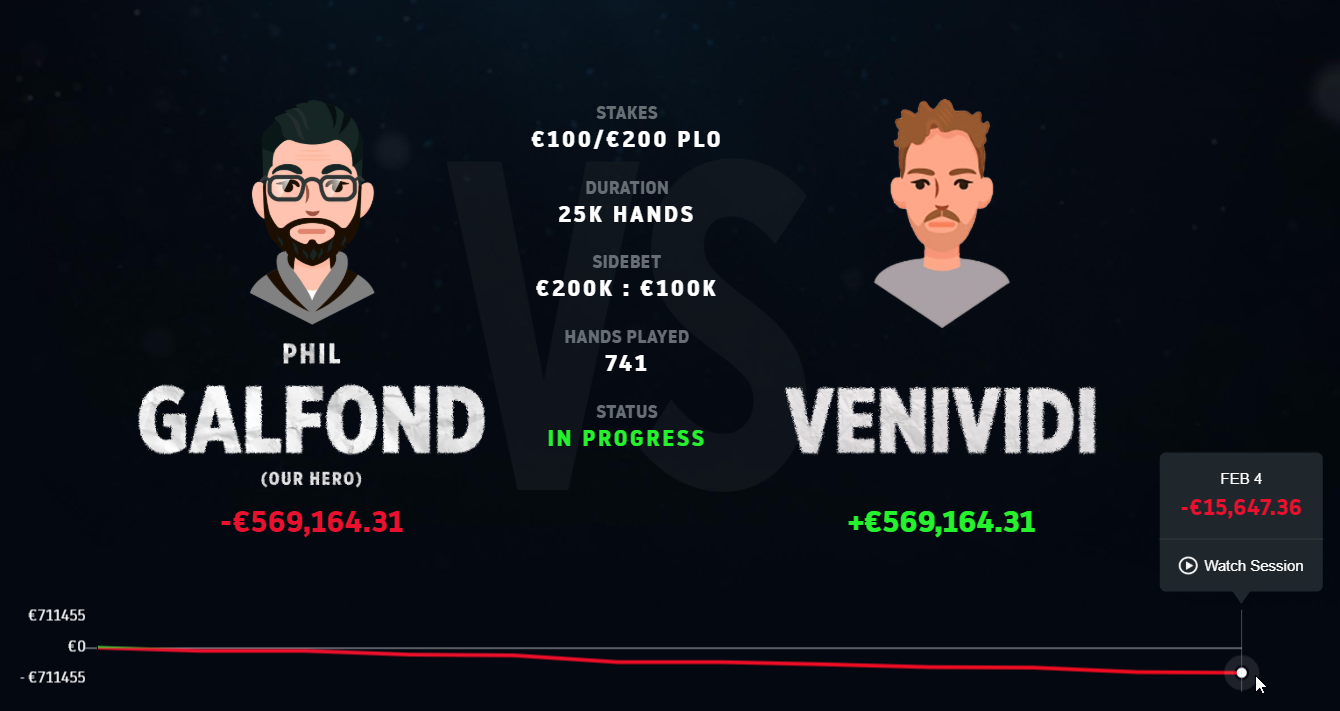 Phil Galfond faces a nearly insurmountable disadvantage in his heads-up PLO match against VeniVidi1993. (Image: Run It Once)

Galfond has steadily lost over the course of the challenge, which began on Jan. 22. In 11 attempts, the Run It Once founder has only booked a single win: a €2,615 advantage in 715 hands played on Day 2 of the match.

Galfond stands to lose even more than the current numbers suggest. Not only do the two have more than 17,000 hands left to play, but Galfond is also risking €200,000 in a side bet with VeniVidi1993, who put up €100,000 at 2/1 odds. Either player has the option of bailing on the match at any time, though they would immediately forfeit the side bet.

So far, Galfond hasn’t shown any signs of quitting. While he recognizes that there’s almost no chance of winning the match at this point, he wrote to fans to say that he still plans to play his best for the remainder of the contest.

Attempting to get even means attempting to get lucky,” Galfond wrote on Twitter after the seventh day of the challenge. “It’s important during a downswing to mentally reset, accept your new reality, and make the most of it. I see my current reality as an opportunity to set an example for players who are following the challenge … my goal, and my plan, is to come out ahead from this point in the challenge onward.”

Galfond has maintained a sense of humor throughout the challenge, despite how poorly it has gone from his perspective. Following Tuesday’s session, he took to Twitter to note that it was the first day of the contest in which he benefitted from good luck in all-in situations.

First day of positive AIEV in the #GalfondChallenge! Popping champagne at the Galfond house. pic.twitter.com/jpc8e9AVay

Hey guys, I just wanted to share a tip on how to lose the last of that stubborn baby weight. It really takes no effort at all and can be done in 10 days. It’s called the #GalfondChallenge

The Galfond Challenge won’t end when this match concludes. Galfond put out a call for challengers to play him in high-stakes, heads-up matches and got plenty of responses, with several more opponents already lined up.