Phil Galfond still trails by a sizeable amount in the third Galfond Challenge against the challenger, poker coach Chance Kornuth. But the competition is moving at a snail’s pace, and still isn’t even close to reaching the halfway point. 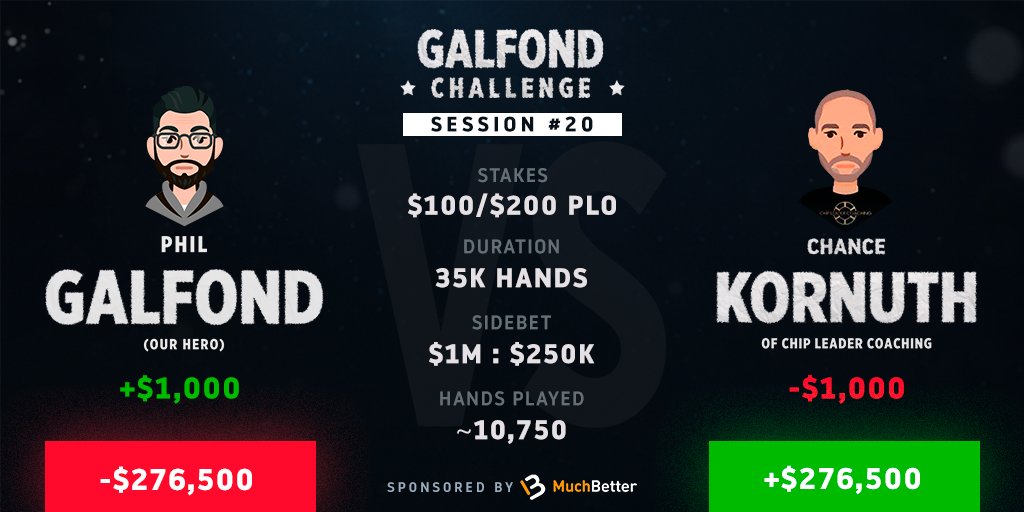 The high-stakes Pot-Limit Omaha challenge began more than a month ago. At this pace, it may not finish before the Daniel Negreanu-Doug Polk match, which has just begun. Kornuth and Galfond agreed to play 35,000 hands at $100/$200 stakes on WSOP.com in Nevada.

Due to travel issues and not wanting to be outside the US for so long, the match isn’t taking place on Run it Once, the poker site owned by Galfond. And thus far, the change in scenery hasn’t been kind to the poker site founder.

Early on, it seemed like Galfond was destined to cruise to victory. Not only did he begin the third Galfond Challenge, after having won the first two against “VeniVidi1993” and “ActionFreak,” as a 4-1 favorite. He then jumped out to a huge lead through the first nine sessions — nearly $280,000. But the match has shifted in the opposite direction ever since.

Over the past few weeks, Kornuth has dominated the Galfond Challenge. Galfond bounced back a bit in the past two sessions, profiting around $45,000 in total, but he still trails in the match by $276,500, which is the equivalent of nearly 14 buy-ins ($20,000 each).

Here’s the good news for the former Full Tilt Poker star. He’s been in an even worse position before, as he trailed by over $900,000 earlier this year to “VeniVidi1993” before pulling out a miraculous comeback. And he still has plenty of time to erase the massive deficit. The poker pros have only completed 10,750 hands, or about 31% of the match.

The third Galfond Challenge has moved much slower than the first two. Kornuth and Galfond haven’t been playing daily, and have taken quite a few breaks along the way. Kornuth said on Twitter that they expect to play five days this week, starting on Monday.

Played shitty down the stretch today. Lost 2k. Gonna enjoy some relaxing time off before we play 5 days next week