Galfond Challenge Has Taught Poker Community Many Lessons So Far
May 2, 2020 Online Poker

What Beginner Poker Players Can Learn From Nearly 30,000 Hands of the Galfond Challenge

The Galfond Challenge has served as a soothing escape from reality during the current global health pandemic. But it’s also taught the poker community some valuable lessons that beginners may not have realized. 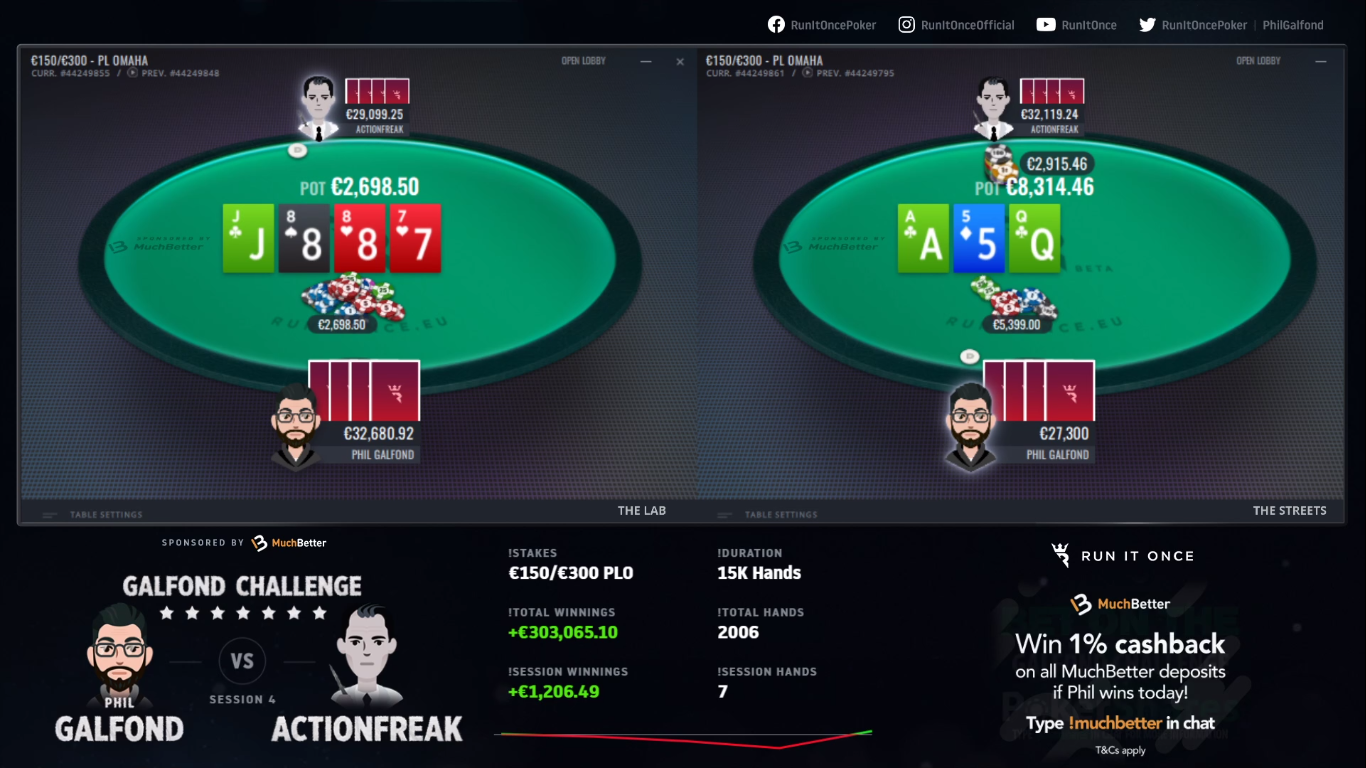 The Galfond Challenge is an escape from reality during COVID-19. (Image: Twitch/ Run it Once Poker)

Phil Galfond first competed in an action-packed battle for the ages against “VeniVidi1993,” an online pro. He rallied from a €900,000 deficit to win the 25,000-hand, high-stakes PLO competition in the final session. More than 22,000 poker fans watched the historic comeback live on Twitch.

Galfond then began his second and third challenges, one against Bill Perkins and  the other against online pro, “ActionFreak.” Through two sessions and 1,013 hands against Perkins, he leads €90,144. In his other match, the Run it Once founder has a massive lead of €416,442 after four days.

The once-dominant player on Full Tilt Poker has now completed nearly 30,000 hands. Although there are still many hands remaining, and multiple competitors waiting in line, the Galfond Challenge has taught us quite a bit about the game of poker, especially Pot-Limit Omaha.

Patience is a Virtue

During Galfond’s first match against “VeniVidi1993,” he trailed by nearly $1 million through 16 sessions. He considered walking away and just paying off the €200,000 side bet. Instead, he took a month off and regrouped.

Most poker players can’t afford to lose that kind of money. Actually, most don’t have that much to lose in the first place. But the lesson Galfond taught us, especially beginners, is that no matter how much money you’re down, if you play your cards right and remain patient, you can get out of the hole. Well, unless you run out of money and can’t pay for the buy-in, of course.

PLO Swings Aren’t for the Faint of Heart

It’s certainly no secret that Pot-Limit Omaha is a game of high-variance. The swings are massive, and it doesn’t matter what buy-in level you play at. But for those who don’t play much PLO, if any at all, you may not have realized just how big those swings can  be. If you can’t handle constant ups and downs, this probably isn’t the game for you.

Poker is a long game. If you need any further proof of why you shouldn’t be too obsessed with short-term wins or losses, look no further than the first Galfond Challenge.

Galfond, at least publicly, didn’t allow the horrendous run of cards early in his first challenge to deter him. Instead, he battled back and came out ahead in the long run. Following each session, he answered questions about that day’s performance. If you paid close attention to how he responded, you’ll notice he was rarely emotional after a session. That’s likely because he tried to remain level-headed and understands poker success isn’t based on short-term victories or defeats.

Galfond is Really Good at Poker

This is pretty obvious to anyone who’s ever watched him play. But, perhaps, some of you weren’t a part of the poker community during the Full Tilt Poker days and didn’t know much about the player once known as “OMGClayAiken.”

During his challenge, Galfond has shown that he can win against top competition over a large sample size. And he’s proven his resiliency, which is an important trait that winning players must possess. If there’s a better PLO player in the world, we’d sure as heck like to see that person play.

Through a full Galfond Challenge and parts of two others, Galfond has turned a €508,258 profit over 28,684 hands. That averages out to €17.72 per hand played. To put that in perspective, he’s earning about €35 every minute or so when you consider they play two tables at a time and each hand lasts a minute or less, on average. And that doesn’t include the six-figure side bet winnings.

In 45 total sessions, Galfond has won 23 of them (51.1%). So, although he is losing nearly as often as he’s winning, he’s taking down a large portion of the big pots. And that’s really what matters most.

Will he continue his hot streak and dominate his remaining challenges? Tune in to Twitch (Run it Once Poker) over the coming months to find out.