It wasn’t long ago that many were eagerly awaiting debut of cross-state, regulated online poker in Pennsylvania. However, the future of online poker featuring shared liquidity is now very much in doubt in the Keystone State. 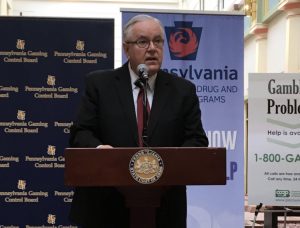 Officials with the Pennsylvania Gaming Control Board (PCGB) have responded to last week’s judgment by the Department of Justice (DOJ) which reversed its legal interpretation of the Wire Act.

The ruling means that all forms of gambling – poker or otherwise – are banned across state lines. That is, of course, a major issue for any poker operator looking to offer games with a shared pool of players in other states.

Executive Director of the PCGB Kevin O’Toole responded to the ruling by sending out a letter to Pennsylvania gaming operators this week, and it’s bad news for anyone hoping to play poker against people outside of their own state.

“It is your obligation to comply with federal law in all respects in establishing your gaming operations, which now must be entirely ‘intrastate,’ O’Toole wrote.

It means that while online poker operators in Pennsylvania can run games with a local-only player pool, they won’t be allowed to join any bigger pools located in other states.

In May of last year, New Jersey joined in with Nevada and Delaware in an interstate shared liquidity agreement. However, that arrangement hasn’t done much to boost the bottom line in the early months.

Although nothing had been made official, Pennsylvania players were expected to join that pool in early 2019. PokerStars was even granted a license to operate in the state late last year. It’ll still be allowed to operate, but the site will be fenced in and forced to operate within Pennsylvania alone.

It remains to be seen whether that limitation would allow PokerStars to run a financially-viable poker operation. The company has made no comment on its immediate plans in Pennsylvania.

That’s not the only obstacle presented by the DOJ ruling.

Not only must all bets be placed within state borders, but all servers and payment processors now also need to be located locally as well.

“We no longer believe it is consistent with the law as articulated in the (DOJ) Opinion to locate interactive gaming devices and associated equipment in any jurisdiction other than Pennsylvania,” said O’Toole.

As anyone who’s played online poker in any country of late knows, depositing and withdrawing money from a site is already challenging enough.

The PCGB says operators have 30 days to comply with the change in law.

this is really getting borring. 1 step back>2 steps front>3 steps back>2 sptets front… cmn
I do kinda feel fro the americas thou. just as you get your hopes up …. and than again.

“It means that while online poker operators in Pennsylvania can run games with a local-only player pool, they won’t be allowed to join any bigger pools located in other states.” – many smarts… very many smarts… good job LUL