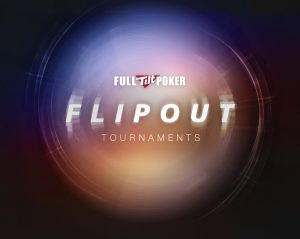 At Full Tilt Poker, waiting has never been the hardest part for players who want to get into the action as soon as possible. The online poker room’s introduction of the popular Rush Poker and Adrenaline Rush Poker games has kept the waiting time between hands down to the bare minimum. But “fast” isn’t just one speed for Full Tilt, as they are now introducing a new way to play with Flipout Tournaments.

Flipout Tournaments are being touted by Full Tilt as a “new way to play online tournament poker.” In these Flipout games, players are automatically all-in when facing off against each other in the opening Shootout round. Winners from tables are then taken to the next round in the Flipout Tournament, where they are guaranteed to receive a payout. Any remaining players will be reseated, continuing on with the tournament in a standard betting format.

Players who want to get themselves into the money faster than they ever have before will find what they need with Flipout Tournaments. Like any other tournament, there are still prizes to be won. Players who bust during the first round of a Flipout have the ability to jump right into another fast-paced tournament, without the agony of waiting to see if they make it past the bubble. The format lends itself to players who don’t enjoy the time it takes before seeing the money, or even those who simply don’t have as much time to spend in tournament play.

“Full Tilt Poker is dedicated to the continual evolution of online poker to keep it fun, fresh and exciting; not just for our existing players, but also to help attract the generations coming up,” said Full Tilt’s head of marketing Sarne Lightman in a company-issued press release.

“Flipouts are a game changer–literally unlike any other online poker tournament. Perfect for the time-poor player who wants to jump straight to the post-bubble action with a stack and blind levels that give them plenty of play,” Lightman added.

To celebrate this newest format, Full Tilt Poker launched a four-day Flipout Festival tha kicked off this weekend. Starting on Friday, March 21 and ending this Monday, March 24, the Festival will give players a chance to win their share of $25,000 in added cash and prizes. A total of 108 tournaments are spread across twelve events, each featuring different buy-in levels that progressively increase and begin with a freeroll. Any tournament that uses a real-money buy-in implements a Multi-Entry Tournament format, allowing players to register up to three times.

The Main Event’s first tournament is a freeroll with a $100 prize pool which begins on Sunday, March 23 at 14:00 ET. A $0.55 tournament follows with an increasing buy-in amount until the final event of the tournament. That event features a $55 buy-in and $2,000 added to the prize pool.

Players who don’t come out on top during the Flipout Festival Tournaments still have a chance to win prizes. Players receive a ticket for the Final Flipout Freeroll for every five tournaments they bought into but didn’t win a prize in. Starting on Saturday, March 29, up to three entries can be earned for a chance at over $5,000 in prizes. Placing in 128th through 9th position wins a Full Tilt Poker hoodie. The top eight winners receive a Full Tilt Poker goodie bag with a back pack, hoodie and cap. The player in first place will be awarded with an iPad Air Wi-Fi.