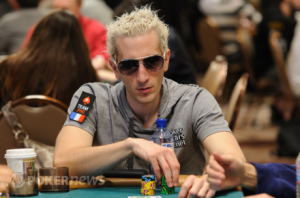 Bertrand “ElkY” Grospellier is in a tough spot, thanks to a new law that will push PokerStars.fr and Winamax to no longer operate in the United Kingdom. (Image: fr.pokernews.com)

French poker sites Winamax and PokerStars.fr are pulling out of the United Kingdom. While each has a separate, but highly related reason, the changes could be seen as soon as October 1 for players. Winamax did not file an application for a license under the UK’s new laws, while the French-facing PokerStars site simply does not want to be exposed to double taxes under the UK Gambling Bill.

This greatly affects players like Bertrand “ElkY” Grospellier, who is a French citizen living in the UK, and is effectively the face of French poker for PokerStars.

French online poker site operator Winamax had sought to bring in new players from other European countries. However, the UK Point of Consumption Tax, which will be imposed this December, made the possibility of operating in the UK unfeasible.

High taxes are already levied by France on UK players who play on the Winamax.fr poker site, but the additional 15 percent tax on all revenues from British players made the whole endeavor pointless.Thus, when it came time to submitting a license application, Winamax simply did not respond.

In an email sent to all customers in the United Kingdom, PokerStars.fr said that it will be closing its doors come October 1. All French poker sites will be subject to “double tax” payments if they offer services in the UK, since they would be taxed at home, and now under the new bill, be taxed by the UK Gambling Bill.

Players who received the notice have been advised to immediately cash out all funds. The email explicitly states, “UK-based players using the .FR client will need to cashout their funds in the usual way – there is no risk for you to lose your funds, but any balance on the .FR client must be withdrawn to your registered bank account.”

Players are also recommended to claim any VIP Stellar Rewards and Milestone Credits prior to the October 1 deadline. As part of the migration, all players in the UK playing on PokerStars.com will be moved to PokerStars.co.uk and all players have to do is just download a new software client.

Players in the UK will notice two differences at the tables as a result of the new law. First, auto top-up in cash games is being removed, as are auto re-buys in tournaments. As a way to ease the hassle for UK players, £5,000 worth of freerolls will be available starting each night at 8pm BST from October 1-5.

Bertrand “ElkY” Grospellier appears to have a very difficult decision ahead of him. As many top French poker players have done, he’s left his home country to avoid paying 75 percent income tax rates. Playing in the UK offers the luxury of paying no taxes on poker, and during the past few years, he’s been the face of PokerStars.fr for all marketing efforts. Now, he’ll most likely have to make the decision to move away from the UK to continue playing on PokerStars.fr, but not to his home France, so he doesn’t have to pay a 75 percent income tax rate.