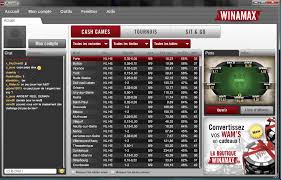 Winamax remains the largest online poker site in France, though it is struggling to meet tournament guarantees as of late. (Image: PokerListings/Winamax)

Winamax and PokerStars are the two biggest names in French online poker, and that won’t be changing any time soon.

But the two companies have both found that reaching their tournament guarantees has become harder in recent months, with both recently falling short of fields that would cover their €1 million ($1.14 million) guarantees.

At the moment, there is no reason to think that either of these sites will stop offering such big prize pools to their players, as the promise of such lucrative tournaments plays heavily into their advertising efforts.

However, neither company can be terribly happy with the ongoing trends in their flagship events.

For PokerStars, the shortfall occurred in their Sunday Million event.

The tournament drew an impressive sounding 4,109 players last weekend, but that is down from a tournament that once attracted 5,000 or more entries on a regular basis.

That figure wasn’t enough to cover the tournament’s guarantee, either.

That’s hardly a disaster, but not the trend that the world’s largest poker site wants to see in one of the few markets it does not dominate.

A similar story played out on Winamax, which drew an even larger field for the Main Event of its latest Winamax Series.

Once again, that meant that the buy-ins alone didn’t cover the prize pool, as the operator had to use the entry fees paid by players to fill out the prize pool.

This is the result of a disconcerting downward trend in these big events, as the same tournament drew over 7,700 players a year ago.

This isn’t the first time that Winamax.fr has had to deal with disappointing tournament turnouts.

In August, the site reduced entry fees in a €100,000 ($114,000) guaranteed tournament that also carried a €150 buy-in in order to attract more players for later starting days in response to poor turnout for the first flight.

These worrisome tournament fields are one of many signs of an ongoing decline in the French online poker market.

Since France first launched their regulated market in 2010, the sites have seen a gradual falloff in interest from players, with regulator ARJEL having pointed to a general decline in poker’s popularity as the main reason.

Other possible answers are the high level of taxation faced by operators in the regulated market, as well as the fact that many French poker players still operate on unlicensed foreign sites.

The most widely-discussed solution to the market’s ills has been allowing French players to compete with those in other countries, with neighboring regulated markets in Italy and Spain being the most likely partners.

AT the moment, Winamax.fr is the largest operator in the regulated French market, averaging about 1,200 cash game players over the past week according to PokerScout.

PokerStars.fr is their main competitor, with an average of about 750 players in their cash games, while no other site averages more than 325.

I like it when the sites offer a real overlay ! unfortunately , it’s a bad sign for the online poker industry in general .