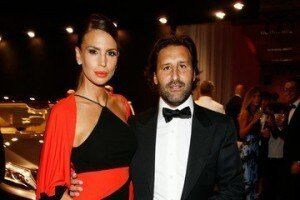 Arnaud Mimran’s new black and white outfit might feature a horizontal pattern as French authorities have arrested the billionaire on suspicion of fraud and murder. (Image: zimbio.com)

Arnaud Mimran has long enjoyed the good life, but it took a dramatic turn in January after France’s National Judicial Customs Department (SNDJ) arrested the 43-year-old on suspicion of tax fraud, and possibly even murder.

Aside from his romantic escapades with Paraguayan showgirl and model Claudia Galanti, one of Mimran’s favorite activities is playing cash poker.

He was scheduled to enter the World Series of Poker’s inaugural $1 million Big One for One Drop, and although he never ponied up the buy-in, he has competed at several tournaments and EPT events.

His best live finish came at the 2006 PokerStars European Poker Tour Monte Carlo Grand Final where he placed 13th for a win of $33,846.

It might also be his last as the playboy businessman is facing a lengthy stint behind bars.

The vast majority of Mimran’s fortune is credited to his real estate ventures, but many have speculated that his business couldn’t possibly support his life of luxury.

From his expensive tastes in cars to over-the-top entertainment, Mimran doesn’t seem to have any limits in regards to spending. He resides in a lavish 1,300 square-foot apartment in Paris’ 16e arrondissement, one of the wealthiest districts in the French capital city. He even paid celebrities Diddy, Pharrell, and Bar Refaeli to attend his son’s bar mitzvah. Mazel tov!

According to French Judge Guillaume Daieff, Mimran’s high life is nothing more than a big scam. Guillaume ordered Mimran’s arrest after an investigation connected him to a carbon tax scheme that operated during the 2000s.

Investigators pieced together that Mimran’s business made billions by coordinating a value added tax (VAT) fraud on the sale of CO2 emission quotas, a commodity that is often traded.

The French are also demanding Arnaud explain his personal wealth and clarify his financial standing after claiming yearly income of about €45,000 ($50,900) between 2010 and 2012. That level of income certainly can’t finance a 1,300 square foot apartment in Paris, let alone his unrestrained lifestyle.

Mimran’s legal troubles might not stop at tax fraud. French media outlets are also reporting that Arnaud is connected to a series of homicides.

A former colleague by the name of Samy Souied was mysteriously murdered in 2010 in Paris. According to previously classified information, Mimran’s name appears on Souied’s police file as a possible person of interest. Souied was allegedly involved in the carbon tax fraud, but details surrounding his untimely death remain unsolved.

That’s not the only murder case Mimran’s name is legally attached to. Following the homicide of his father-in-law, billionaire French hotelier Claude Dray, Mimran was once again entered on the record. While it might make sense for a relative to be listed, Mimran’s name was documented on yet a third murder investigation following a masked attack and killing of poker pro Cyril Mouly’s driver last spring.

Although America’s poker bad boy Dan Bilzerian just escaped jail time for his latest antics, Arnaud Mimran shouldn’t expect such luck in dealing with France. Should he be found guilty on any of the charges, Mimran is going all-in on the slammer.

The rich are so corrupt; i hope this guy gets every minute of jail time he deserves.

The rich are so corrupt; i hope this guy gets every minute of jail time he deserves.