If he hasn’t already drank Las Vegas dry, Frank Stepuchin can crack open another a cold one to celebrate his WPT Gardens Poker Championship on Tuesday night for $548,825. 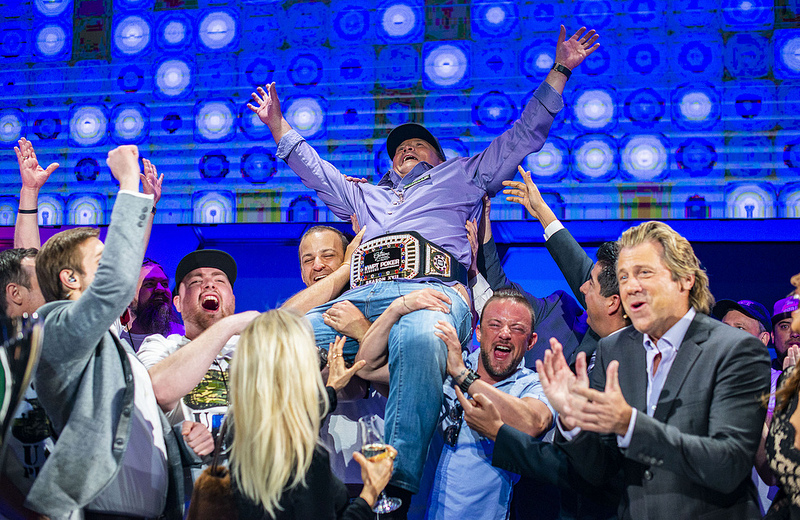 Stepuchin created a frat party-like atmosphere inside the HyperX Esports Arena at the Luxor. He downed beers like he was at a kegger, not a poker tournament. But while some might think boozing it up with so much money on the line is a bad idea, it sure was effective.

WPT Gardens Poker Championship began January 12 at the Gardens Casino in Los Angeles. The tournament played down to the final table of six four days later before halting play until Tuesday afternoon. But this time, the remaining players traveled to Las Vegas for the conclusion. The wait was certainly worth it for Frank Stepuchin.

None of the final table competitors were past World Poker Tour champions. But four of them had WPT final table experience. Only Stepuchin and sixth place finisher Jonathan Abdellatif were in uncharted territory.

Shannon Shorr (second place), Steve Sung (third), and Ray Qartomy (fifth), had all been in this position three previous times.

Qartomy has quietly been one of the most impressive performers on the World Poker Tour the past 10 months. During that period, he has fourth, fifth, eighth, and 66th place finishes, but no titles.

Came for a Poker Tournament, Arrived at a Party

Stepuchin’s behavior at the table, albeit friendly, may have rubbed some people the wrong way. Others at table didn’t bothered by his actions, however.

The Las Vegas local drank numerous beers throughout the night and rarely kept his mouth shut. He indulged in a greasy burger and fries, a stark contrast to the vegan and healthy foods most of the high rollers order these days.

There’s certainly nothing wrong with enjoying a tasty burger and engaging in harmless banter. But he did one thing that made some viewers roll their eyes.

During some hands, typically after he made a bet, he grabbed his opponent’s arms to feel their pulse. He clearly did so in a joking manner. But some poker players might be disturbed at his behavior. His biggest offense, however, was eating a tasty looking chicken wing with prongs.

I don’t think I could fold. He’s just gonna have to bust me. #WPTGardens #whyisheholdingthatchicken pic.twitter.com/AOOLlcZSLq

Stepuchin was the life of the party. Actually, he was the party. The other five players took a business-like approach to the final table. Perhaps, they should have followed Frank’s lead because he was the only one left with chips when the night concluded.

The first-time WPT champion earned $548,825 for his efforts. And probably a massive hangover this morning. The only question now is how much does he even remember from the final table?

Nice story albeit with a salutary tale that underlies it! Most of the players it would seem had a sober approach to the tournament, however the subject of the story took a much more light hearted, but perhaps heart threatening approach to the game. It may also show that alcohol reduces inhibitions and therefore he may wish to put his victory down to an element of luck, playing hands he may not others do so. Good luck to him, but he needs to make sure he gets to the gym or hit the road to work off some of those calories and fat that he took on board so he survives to the next tourney!

If there is a Drunken Master Competition for CardsChat I’m in! I might not win the poker tournament, but I think I have a decent shot at the drinking contest.

He won so congrats to that. He just looked like the drunk uncle with the deer in the headlights facial expression. As well he comes across like he thinks he’s funny…his antics unfortunately are uncomfortable to watch…reading the other players facial expressions, they would agree.