PokerStars has become the first poker site licensed to share player pools between France and Spain, as of Tuesday, Jan. 16. Poker players in these countries on the world’s largest online poker site now compete against each other, marking a major step towards improved poker action worldwide. 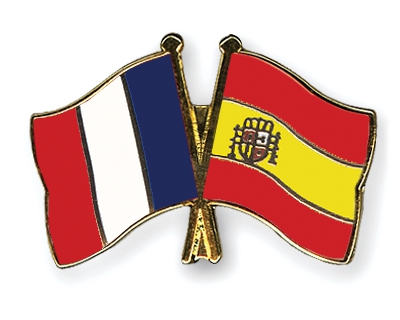 Poker players in France and Spain will now have the opportunity to compete against each other on PokerStars. (Image: Crossed-Flag-Pins.com)

The Stars Group announced today that players on PokerStars.es and PokerStars.fr would know be able to compete against each other.

“Congrats @PokerStars for being the 1st licensed online poker room sharing liquidity in France & Spain,” Alex Dreyfus, a native Frenchman and CEO of Global Poker Index tweeted. “I’m sure there was a lot of working behind the scene. Great step for the industry.”

Stars Group COO Guy Templer issued a press release praising Spanish and French regulators for “enabling the dramatic improvement in the gaming experience in their jurisdictions.”

Templer believes that combining player pools has “proven to be attractive to consumers who might otherwise be choosing to play on unlicensed and potentially unsafe sites.”

France, Spain, Italy, and Portugal agreed to a liquidity sharing deal amongst the countries in July. French and Spanish regulators were the first to approve the deal, allowing the new poker peace accords across the Pyrenees.

Now that these countries, each having a population that exceeds 46 million, have merged together on PokerStars, that means more games will be available to players in both countries.

To celebrate the recent news, PokerStars is getting fresh by announcing a €5 million guaranteed series dubbed the France España Hold’em (FRESH) series.

The series is only available to those in France and Spain, and will begin on Jan. 28 and conclude Feb. 11. PokerStars hasn’t released the full FRESH schedule, but we do know the series will include a Main Event and daily satellites. Players will have an opportunity to qualify for the Main Event for free.

Templer’s claims about the need for shared player pools are accurate. Doubters need only look at the United States as a prime example. In the US, only three states (Nevada, Delaware, and New Jersey) currently have licensed poker sites in operation, with Pennsylvania to soon hop on board.

In October, New Jersey agreed to share player pools with Nevada and Delaware (who had been sharing since 2015), marking a big step for online poker in the US.

Due to a lack of licensed poker sites in other states, many players have gravitated toward unregulated sites such as Americas Cardroom and Ignition, which come with their own risks. It can be difficult and time consuming to fund an account, and to receive a withdrawal promptly and with confidence.

Additionally, on both regulated and unregulated sites, small player pools limit game selection and the overall experience. More liquidity sharing across state and national borders, most people believe, only helps to improve the overall user experience in an online poker room.

If that is indeed the case, the US could have much to learn from European countries such as Spain and France as they blaze new shared liquidity trails.

in my division of the pool of players by country – does not benefit either online poker, or the players themselves. Players do not have the opportunity to play with stronger players from different countries and learn the game. Perhaps this is good for entertaining players, but this does not give them the necessary gaming experience, and they remain weak players.

And of course, we are all waiting for thousands of wealthy American players to go to the cash tables for PokerStars. Our wallets are eagerly awaiting their money!

Now if only the US can get its act together, we can see tons of US/Canada cross promotion. It really was a great thing for Canadian players to have Americans playing on PS.

Some Casinos in England to Reopen but Regional Lockdowns Return