Mikiya Kudo has become the latest Asian Poker Tour (APT) champion after closing out the latest main event, held at Resorts World Manila in the Philippines, in just 103 hands. 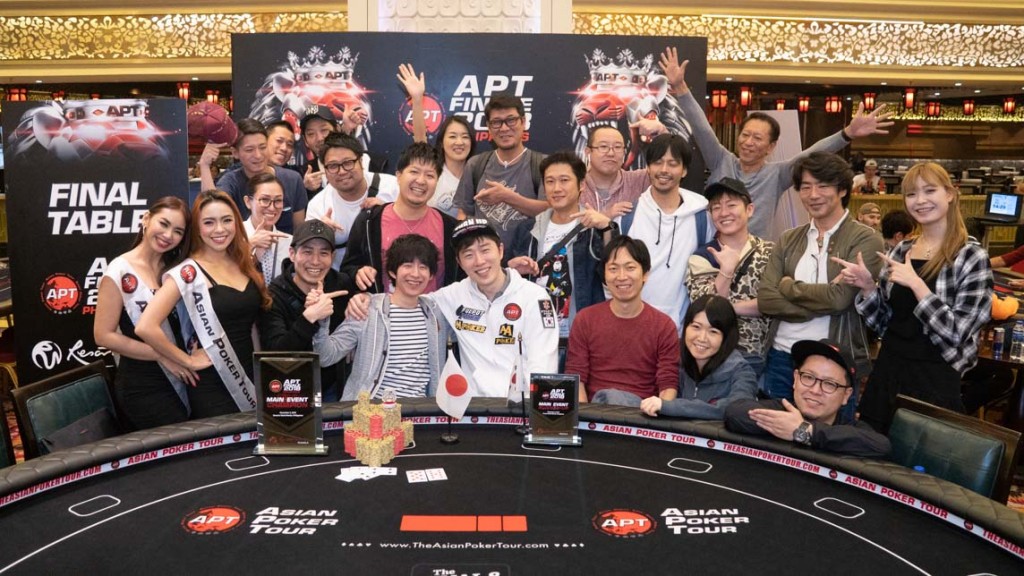 Give a hand to Mikiya Kudo from Japan, as he won the APT Philippines main event for $54,145. (Image: APT)

Sitting down for the final day on December 2, Kudo was the chip leader with just eight players remaining. Holding over 500,000 chips more than his closest rival Lim Yohwan, the Japanese player was the man to beat in the Philippines.

But with Yohwan Lim coming off the back of an APT victory in September, taking down the $1,050 wasn’t going to be easy. Despite the potential stumbling block, Kudo got off to a flying start after eliminating the only remaining local player, Jiego Erquiaga.

Kudo Kicks Things Off in Style

After moving all-in over the top of Kudo’s opening raise, Erquiaga was happy to see his A♥Q♥ was in good shape against his opponent’s 9♠6♠. With the flop rolling out A♠6♦K♣, it looked as though the Filipino would survive the hand and live to fight another day.

The 5♦ on the turn did nothing to change things, but the 9♦ on the river was enough to give Kudo two pair and send Erquiaga to the rail. With the elimination floodgates opened, the UK’s Stephen Nathan soon found himself out of chips, as did Kosei Ichinose and Victor Chong.

By the time just two of the 307 entrants remained, it was Kudo who looked the most dangerous. Despite his opponent Lim having the better poker résumé, Kudo dominated when it mattered.

By hand nine of the heads-up battle, the Japanese player seized the chip lead and never looked back. Within 24 hands, the match was over thanks to some more help from the poker gods.

Calling Lim’s all-in with A♥Q♣, Kudo and his A♠3♥ needed a favorable board to clinch the APT Finale title. As the cards came down, that’s exactly what he got.

With the flop showing 4♠5♠2♦, only a three could save Lim. That card never came and after watching the 9♦ and 8♥ complete the board, a jubilant Kudo collected the APT trophy and the biggest win of his poker career.

For the APT, the latest event in Manila is another example to its increasing popularity in the Asia-Pacific region. Since launching in 2008, the APT has crowned champions in Macau, the Philippines and beyond.

With attendance figures and prizepools increasing, the tour has since found success in Vietnam’s Ho Chi Minh City. Off the back of this, other operators have moved into the region, helping to shine more light on one of poker’s most important emerging markets.